Georgian food is slowly but surely making its way into the mainstream, however, most of those familiar with the cuisine of this beautiful country in the Caucasus know it for hearty khinkali dumplings or cheesy khachapuri. However, this pkhali recipe is a great introduction to the lighter, vegetarian side of Georgian food that is sure to delight!

Though traditionally eaten on its own, pkhali makes a great spread on crackers or toast and can be the perfect dip or hors d’oeuvre before a dinner party or even a lovely healthy lunch when spread on a sandwich! Typically garnished with a sprinkling of gem-like pomegranate seeds, pkhali is a delicious appetiser that is certain to impress all you choose to make it for!

So if you’re looking for a unique, interesting and healthy dish to make for any occasion that will also suit both vegans and vegetarians, then make sure to check out this spinach pkhali recipe! If you’re interested in exploring world cuisines, then this easy-to-make dish is sure to be a hit.

Before I dive into this amazing spinach pkhali recipe, I probably need to discuss what exactly pkhali is. As mentioned earlier, pkhali (spelt ფხალი in Georgian and sometimes transliterated to fkhali) is a type of salad or spread that is very typical to Georgian cuisine. In fact, you would be hard-pressed to find a meal table that doesn’t include pkhali as one of the many appetisers and fresh dishes on offer.

While below is a spinach pkhali recipe, the dish is made with a host of different vegetables commonly found in Georgian cuisine. Most often, you will find beet pkhali (both with beetroot and beat leaves), carrot pkhali, cabbage pkhali and eggplant pkhali. The last one, eggplant pkhali, is more often referred to as badrijani nigvzit, or eggplant with walnuts. At its heart, all pkhali is a pâté made with pureed vegetables with walnuts and spices and it is incredibly flavourful and deeply delicious.

Pkhali is generally shaped into golfball-sized balls, garnished with pomegranate seeds and then served cold. It has a spreadable consistency and is very good on its own (traditional in Georgia) or spread on crostini, crudités or crackers.

Now that we’ve discussed what exactly pkhali is, it’s time to get into how to make it! Though it is not common in Georgia traditionally (they really love to process all of the ingredients through a hand-cranked steel meat grinder), the easiest way to make this spinach pkhali recipe is to use a food processor. In fact, if you do it this way, you will be able to make it in about ten minutes total and you will find it incredibly easy.

The recipe card at the end of this outlines how to do in a food processor but if you’re like me and don’t have a food processor (I don’t have the space in my teeny tiny kitchen!), I had absolutely no problem with making it using a mortar and pestle and some good old fashioned elbow grease.

The first step of making spinach pkhali is to cook the spinach. Bring a large pot of water to a boil and add the spinach, stirring to make sure it is fully submerged. You may need to do this incrementally if you have a smaller pot. Only cook the spinach for about a minute before removing from the heat and draining in a colander.

Using the back of a spoon (or your hands after the spinach has cooled down enough), press as much of the excess liquid out of the spinach as you can by pushing it against the colander. The less moisture in your spinach, the better, as too much could resort in a watery pkhali. Set the spinach aside for later.

If you’re using a food processor, add walnuts and garlic into the bowl and pulse until it reaches the consistency of wet sand. Alternatively, if you’re going the “traditional” route with the mortar and pestle, I recommend chopping the walnuts finely before adding them to your mortar and pounding until they reach the desired consistency. Transfer to a mixing bowl where I recommend grating the garlic on a rasp-style grater in order to get it into a puree, then mix to combine.

In the food processor, add the spinach and cilantro to the walnut and garlic mixture and pulse until pureed and homogenous, turning into a large mixing bowl when complete. For the manual way, purree the spinach in the mortar and pestle before adding it to your walnut mixture. Chop the cilantro very finely and add that to the bowl, as well, stir well to combine.

In the mixing bowl, add white wine vinegar, ground coriander, blue fenugreek (available online here), cayenne pepper, a neutral oil of your choosing (Georgians will use sunflower oil, but it doesn’t really matter) and season with salt and pepper to taste. Mix until well combined, adjusting for seasoning as needed. Cover the mixture and refrigerate until it is firm, at least one hour, but it can be made up to three days in advance if stored in an airtight container.

Once the mixture has chilled, it is time to form your pkhali! Divide it into equal portions and, using clean hands, roll into golf-ball sized balls. Garnish the pkhali by pressing a few pomegranate seeds into the top of the balls — it also looks pretty to scatter some pomegranate seeds on the serving dish. The pomegranate adds a welcome fruitiness and acidity to the final product, so it’s recommended not to skip this step.

And that is it! You can serve these delicious Georgian spinach balls on their own, however, they’re best if you have some crostini, crackers or crudités to eat it with.

If you’re interested in learning more about Georgian food or cooking some delicious and unique dishes, then this spinach pkhali recipe is sure to hit the spot. Easy, quick and healthy, pkhali is a dish that deserves to be on your next hors d’oeuvres table!

Have you been wondering how to make pkhali? Do you have any questions about this spinach pkhali recipe? Let us know in the comments! 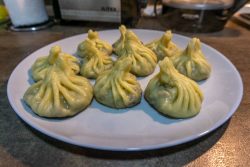 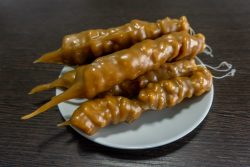 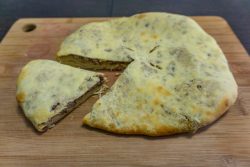