Bulgaria was a country that had piqued my interest from the beginning of my Eastern European travels. I can be a bit of a dork about ancient civilisations and had heard that the country boasts some of the best preserved Thracian ruins in the world. Combine that with a world-class wine country, a diverse landscape, and top-notch beaches all at very affordable prices, you could say that I had high hopes when it came to exploring Bulgaria.

I had, however, not expected much from Sofia. From some previous research and discussions with other travellers, I had heard that Sofia was a slightly underwhelming city and to set my sights on the likes of Plovdiv and Veliko Tarnovo. And while the latter two cities were both appealing and dynamic in their own right, Sofia really took me by surprise. It is a lively and cosmopolitan city with no shortage of things to do, I really came to love the time we spent in the bustling metropolis.

Sofia is old. About 2500 years old and this is almost instantly evident. Not in the sense that everything is crumbling and falling apart, quite the contrary actually. Sofia seems to have joined the ancient and the contemporary in a beautiful marriage. It was one of the things I found most striking about the city. I loved walking through the streets and seeing the old right next to the new — the ruins of the ancient city at the entrance to the metro, a Byzantine cathedral adjacent to communist-era housing.

One of the best ways to get a full understanding of Sofia’s extensive history is to take afree walking tours offered in the city. We took one with Free Sofia Tours and cannot recommend it more. These tours are fantastic starting off points in any city and can give some great advice on where to explore.

While free walking tours are commonplace in most big European cities, Sofia goes above and beyond because there is a company that offers a free food tour called Balkan Bites. I really think that experiencing the cuisine is a great way to learn about another culture, and for that, this tour is absolutely fantastic. You can sample small bites from a number of Sofia’s restaurants, getting a taste for how diverse the food scene in the city is while learning about the history and development of Bulgarian cuisine. Our guide, Rally, was fun and personable and while the food doesn’t differ much from what is found elsewhere in the Balkans, it opened our eyes to tarator, a cold yoghurt and cucumber soup that Michael and I ate pretty much every day after. This tour is, rightly, incredibly popular and therefore I strongly suggest booking in advance to ensure your spot.

Something that the food tour opened our eyes to was that Sofia is kind of a foodie haven. The hipsters seem to have arrived and embraced the city full on and with that provided a number of great fusion restaurants and quirky food trucks.

We also went on the pub crawl run by the same company as the food tour and if you’re interested in sampling a more local side of Sofia’s nightlife, this tour will suit you. It’s different from other pub crawls as it wasn’t geared toward getting tourists drunk and combined some elements of a walking tour. Though we ended at a nightclub, it felt more like a chilled night out with some mates rather than a rowdy backpacker party. Michael and I ended up returning to one of the bars, the Apartment, on another night. I still dream about that place’s raspberry wine.

Sofia isn’t short on culture and there are a number of sights worth seeing if you’re not solely interested eating your days and drinking your nights away. The Alexander Nevsky Cathedral is one of the world’s largest Orthodox cathedrals (the largest is in Belgrade!) and it is beautiful and the Boyana Church and its gardens are listed as a UNESCO World Heritage site. The Amphitheatre of Serdica in the city centre is an excellently well-preserved Thracian ruin and it is amazing to see such ancient, impressive architecture. The Sofia Central Mineral Baths are also worth a visit, with a newly renovated interior.

Michael and I really ended up loving Sofia and it is a city that I’m certain we will return to. A place I would consider living, Sofia is large and diverse with a lot of options and it really deserves to be on the tourist’s radar.

Have you been to Sofia? What did you like/dislike about the city? Add a comment below! 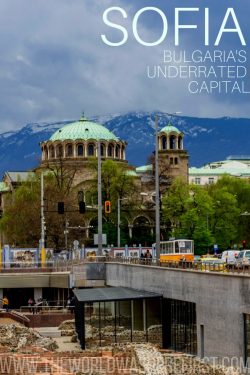 A Different Side of Bulgaria’s Black Sea Coast

The Perfect Bulgaria Itinerary: 5 to 10 Days (or More!)