Disclaimer: This article contains affiliate links. That means if you click a link and make a purchase, we make a small commission at no extra cost to you. 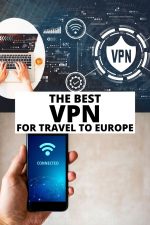 Despite security concerns being less of an issue compared to some other destinations, many people still find themselves wanting to know what the best VPN for travel to Europe is.

Having worked online now for a couple of years across a number of different destinations, having a VPN is an essential service. However, even if you’re only travelling to Europe for a short trip, it’s worth investing in one of these best VPNs for Europe for a number of reasons.

If you’re unsure about what the best VPN for Europe travel is and why you should consider buying one before you leave then read on!

Want a quick answer? The best overall VPN for travel to Europe is ExpressVPN or NordVPN.

If you’re looking for a budget VPN for Europe, consider SurfShark or CyberGhost.

Why use a VPN in Europe?

Before we delve into more detail about what some of the best VPNs for travelling in Europe are, it’s worth considering why you should use a VPN in Europe at all. After all, unlike several other international destinations (e.g. China), popular internet services aren’t blocked and most things that are accessible at home if you’re from a Western country will also be accessible in Europe.

Well, one of the main reasons why you should always use a VPN with Europe being no exception is security.

Even if you invest in a prepaid SIM card or mobile WiFi hotspot device before leaving home, chances are there will still be times when you connect to public WiFi. After all, most data plans aren’t unlimited, WiFi can be faster and coverage can be spotty.

Many European cities offer free public WiFI in certain areas of town and obviously most hostels or hotels that you stay at will also offer WiFi. In fact, when travelling in the Balkans, I almost exclusively relied on random public WiFi networks that I found while roaming the streets.

Accessing public WiFi from your laptop or smartphone is one of the riskiest online security issues as it’s relatively easy for other people who know what they’re doing and are on the same WiFi network to access your device. By connecting to the internet using a VPN, you are essentially creating a private virtual tunnel that changes your IP address and allows you to browse securely without anybody else knowing what you’re doing.

Another reason why many people consider investing in a VPN for Europe is to access certain online content that is only available back in their home country. It’s no secret that popular streaming services like Netflix or Amazon Prime, alter the type of content that is available based on your geographic location.

So if you’re in the middle of a favourite show and are planning on catching up on it while riding Europe’s trains then having a VPN will ensure you can continue to watch it.

Finally, a VPN can also be really handy to take advantage of price differences that occur between countries. Many international travel companies such as airlines do change their pricing for the same product in different countries. You can use a VPN to check the price differences and see if you can save money by booking in a different location to where you are currently based.

What to Look for in a VPN?

Not all VPNs are created equal and it’s worth keeping that in mind when choosing the best VPN for travel to Europe for you. There are many free or cheap VPNs available on the market, however, ultimately they are less secure, user-friendly and often don’t work if you’re trying to access premium content services.

A premium VPN gives you peace of mind which is why I highly recommend not to skimp when purchasing a VPN for use in Europe. It’s worth paying attention to different packages that certain VPN providers offer so you’re aware of how many devices you can use simultaneously, the speed when connecting through a VPN and how many different servers/countries you are able to access the VPN from.

Best VPNs for Travel in Europe

So now that we’ve discussed why you should use a VPN in Europe and what to look for when purchasing one, let’s delve into what I think are some of the best VPNs available for travel in Europe.

ExpressVPN is one of the best premium VPNs available on the market and one of my top choices for the best VPN to use when travelling in Europe. They offer access to over 3000 servers in 160 different locations across 94 countries meaning that you’ll most likely be covered from whichever location you want to route your connection through.

There are no speed limits when using ExpressVPN and they pride themselves on offering top security encryption and privacy settings. One subscription allows you to install ExpressVPN on an unlimited number of devices, though only five devices can be connected at any one time. They offer apps on all major devices and operating systems.

ExpressVPN offers a monthly, six-monthly or annual plan with significant discounts if you choose to subscribe to a yearly subscription. There is a 30-day money-back guarantee so you can try out the service with peace of mind! Click here to see their latest prices.

Finally, ExpressVPN has 24-hour online support so if you run into any issues you will always have somebody to contact!

NordVPN is another top choice for a premium VPN for use in Europe. Offering a whopping 5018 servers across 59 countries, it covers major countries though has fewer country options compared to ExpressVPN.

As one of the most premium options in the market, NordVPN also has top security specifications with unlimited speed and no throttling issues. You can connect on NordVPN on up to 6 devices with all major operating systems and devices having their own apps.

Along with ExpressVPN, NordVPN is seen as one of the top choices for users relying on their VPN to access content from popular streaming services online.

Surfshark is one of the top choices if you’re after a budget VPN to use in Europe. Offering over 1700 servers in 63 countries with unlimited bandwidth, Surfshark also allows you to connect simultaneously on unlimited devices which makes it ideal if travelling with a family who are all using their devices at the same time. However, keep in mind, that some third-party speed tests have Surfshark slower than other premium options listed here.

Surfshark also offers a number of additional perks such as an in-built ad blocker and the ability to whitelist certain apps when using the VPN.

While Surfshark is seen as a top choice if you’re after a budget VPN, it’s important to keep in mind that the large savings are only seen when you sign up to their 24-month plan. They also offer a monthly and annual plan – click here to see their latest prices.

Surfshark, like both ExpressVPN and NordVPN, also offer 24-hour online support and a 30-day money-back guarantee for new customers.

CyberGhost is an alternative to Surfshark if you’re after a budget VPN to use in Europe. Similarly, to Surfshark, the savings of going with CyberGhost are only evident if choosing a 24 or 36-month plan with the 3-year plan even giving you two extra free months. They also offer a monthly and annual plan – click here to see their latest prices.

CyberGhost offers an impressive 6500 servers across 89 countries including special servers that are designed specifically to use for watching content on popular streaming services.

It supports connections on up to 7 simultaneous devices with unlimited bandwidth and traffic. Though, similarly to Surfshark, it tends to perform worse in terms of speed in third-party speed tests compared to premium options.

IPVanish is a mid-range option for those looking for the best VPN for travel to Europe. They offer users over 1400 servers in 75 countries worldwide, allowing up to 10 simulatenous connections.

IPVanish is unique in that they offer a 3-month plan along with their monthly and annual plan. This means that if you intend to only use your VPN for one trip then the 3-month plan allows you to still realise some savings without committing to them long term. They also offer a 30 day month back guarantee – click here to see their latest prices.

PureVPN offers travellers another option looking for a VPN to use during their travels in Europe. PureVPN have had some security controversy in the past around their ‘no logs’ claim which all the other major providers also assure users, however, they have recently opened their books to an independent privacy audit.

They offer over 2000 servers in 140 countries with user allowed on up to 10 simultaneous devices. PureVPN offers one of the most attractive trial deals, allows users to try out their service for 7 days for only $0.99.

After that, they offer plans for 1, 6 or 12 months though the 7-day trial is only available if you then choose the annual plan. They also offer a 31-day money-back guarantee regardless of the plan you choose – click here to see their latest prices.

A final option for those still shopping around and not satisfied with the other VPNs listed in this article – VyprVPN markets itself as one of the best VPNs for streaming services.

They offer 700 servers in approximately 60 countries which isn’t as comprehensive as other providers on this list. They allow up to 5 simultaneous device connections which is on the low end for most VPNs.

VyprVPN offers a monthly or 1 or 2-year plan with the biggest savings being found for users that subscribe for at least one year. There is also a 30-day money-back guarantee – click here to see their latest prices.

Investing is a VPN before travelling to Europe is a must if you want to ensure you can browse the internet securely or simply don’t want to miss on your favourite content while abroad!

Are you looking for the best VPN for travel to Europe? Which do you think is best? Let us know in the comments below!

Michael is a co-founder and writer of The World Was Here First, a travel website dedicated to getting off the beaten path around the world. When not obsessively searching for flight deals, Michael likes being ultra-competitive at table tennis, gazing at street art, and contemplating life while sipping a dram of fine single malt whisky.