Travelling along the southern coast of Cyprus from Paphos to Larnaca is one of the things you must do when visiting the Mediterranean island. While you can zoom between the two cities in just over 90 minutes along the A6 highway, it is worth taking your time and enjoying some of the great attractions on the way if you’re not in a rush.

However, if you’re simply after the fastest way to get between these cities then there are also a number of options to take a bus from Paphos to Larnaca, including potentially via the second largest city of Limassol. For travellers planning on taking this route soon, here’s everything you need to know regardless of which option you choose!

If you don’t have time to enjoy the attractions on the way and are simply looking for the quickest way to get from Paphos to Larnaca then you have a couple of different options.

There are currently 3 buses per day that go directly from Paphos to Larnaca with a stopover in Limassol. The ‘direct’ buses don’t require you to transfer buses and cost €7 per person.

If the timetable for the ‘direct’ bus doesn’t suit your itinerary, then you have the option of taking one of the several buses that go from Paphos to Limassol and then connecting to a bus that travels from Limassol to Larnaca. These buses are more frequent, though it might require you to wait longer in Limassol. The cost for each leg of the journey is €4 per person. The situation is the same if you’re travelling in the reverse direction from Larnaca to Paphos.

At the moment, you can’t book these tickets online, however, you can see the latest timetables here.

Most travellers arriving into Cyprus begin or end their journey from either Paphos Airport or Larnaca Airport. Therefore, there are also options if you want to travel directly to the airport from either Paphos, Larnaca or Limassol. It’s also incredibly easy to get to the capital Nicosia from Paphos or Larnaca.

These routes tend to only run a few times per day so it’s possible that the timetable won’t coincide with your flight arrival or departure. If that’s the case and you’re not planning on driving in Cyprus, then it’s best to spend the first or last day of your trip to Cyprus in the same city as your departure or arrival airport. You can see the latest timetables for these routes here.

Driving from Paphos to Larnaca

Visitors to Cyprus can easily drive from Paphos to Larnaca is just over 90 minutes along the A6 highway. However, I would highly suggest taking the time to do this journey an enjoy a number of great stops along the way. You can even base yourself in Limassol for a night if you want to enjoy the drive at a more leisurely pace.

To find the best deal on car rental in Cyprus, we recommend browsing Rentalcars.com which aggregates prices from the major car hire companies available. It’s also worth it to take out an excess insurance policy from a third party like iCarHireInsurance to ensure you don’t need to pay any excess or deductible in the event that you have to make a claim.

While it’s possible to see some of these stops while staying in Paphos, enjoying them while driving from Paphos to Larnaca will allow you to instead spend time doing some of the other top things in Paphos.

There are a lot of different ruin sites that you can stop at if travelling from Paphos to Larnaca. If you’re not a history enthusiast and are only planning on stopping in once place, then I suggest giving this one a miss.

However, if you’re interested in Greek mythology then you are able to see what is left of the Temple of Aphrodite which is believed to be the first place built to worship the Greek goddess of love. It also acts as a nice precursor for the next stop when driving from Paphos to Limassol! Entry into the ruins is €4,50 per person and it is open daily.

Arguably one of the most iconic locations in all of Cyprus, Aphrodite’s Rock lays its claim as being the birthplace of goddess Aphrodite. Regardless of your interest in Greek mythology, the spot is incredibly beautiful and while there are definitely better beaches in Cyprus, it is still worth stopping here to admire the views.

There is a free car park across from the beach and visitors can then use the underpass to get to Aphrodite’s Rock. The water here is incredibly clear and fairly calm making it ideal if you’re not a strong swimmer.

While I think some of the best villages to explore in Cyprus lie near the Troodos Mountains if you haven’t had a chance to visit those then a stop at Anogyra Village can be a good idea.

The village is a short detour from the main highway that connects Paphos and Larnaca and is a nice picturesque place to walk through. You can visit the local Carob Museum which goes into detail about local carob production in the area. There is also a winery and Oleastro Olive Park if you’re looking for other interesting spots in the village.

If you’re only going to stop at one archaeological site while driving from Paphos to Larnaca, then I suggest making it Kourion Archaeological Site.

Located right on the coast, the ruins here are well preserved and span from the Hellenistic Period to the early Christian period in the 7th century. The highlights of a visit here are arguably the impressive Theatre built right next to the sea and the ruins from the Roman period.

It’s a smaller version of the Paphos Archaeological Park and you can see most of the sites here within about 45 minutes to an hour. Entry into the ruins is €4,50 per person and it is located about a 45-minute drive from Paphos. If you’re looking for a swimming spot after exploring the ruins then Kourion Beach located just next to the ruins is a great option!

Showcasing the incredible history in Cyprus, the Kolossi castle located only a few kilometres from the Kourion Archaeological Site is a well-preserved medieval castle that was built in the 13th century.

It is also located along the coast and was an important strategic location that was originally used by the Knights of the Order of St. John and then later by the Knights Templar.

The castle is three floors high with entry costing €2.50 per person.

Kolossi Castle is the last stop before arriving in Limassol which, depending on how quickly you get through the above stops, means you can either stop here for lunch or for the evening if you want to explore more of the second-largest city in Cyprus. There is a large sea-side promenade, plenty of bars and cafes as well as some historical sites that make it a great place to enjoy the afternoon.

The drive from Limassol to Larnaca is just under an hour, however, in our experience, there weren’t as many interesting spots as on the drive from Paphos to Limassol. However, if you’re looking to break up the journey then there are still a couple of interesting locations that are worth pulling over for.

Located a few kilometres east from Limassol, the Amathus Archaeological Site gives visitors another chance to dive into the history of the island.

This site is quite large and it’s probably best to go here in the morning rather than the afternoon if you want to explore it properly and avoid the harsh afternoon heat in the warmer months. Entry is €2.50 per person.

If you’re looking for a swimming spot when driving from Limassol to Larnaca then look no further than Kalymnos Beach. This was one of the nicest beaches we encountered during our time in Cyprus, with lovely sand and stunning white rocks that provide a nice backdrop for the beach.

The water here is calm making it ideal for swimming, there is a restaurant nearby as well as changing rooms.

If you’ve had enough of Greek & Roman ruins by this point, then the Choirokoitia Archaeological Site provides a nice change of pace. Instead, it’s a well-preserved settlement from the Neolithic Age that provides an insight into the way of life of people that lived here several millennia ago.

Entry to the site costs €2.50 per person and it is open daily.

The final stop from Limassol to Larnaca is technically already in the city of Larnaca. However, as it’s about 7 kilometres from the centre it makes sense to stop at the Larnaca Salt Lake on the way.

The lake is best known for the migratory pink flamingos that arrive here during the winter months and while, unfortunately, we weren’t able to see them, it is still worth stopping to see the Hala Sultan Tekke which sits on the bank of the lake.

Where to Stay in Limassol & Larnaca

If you’re looking for some accommodation options either for spending the night in Limassol or when you arrive in Larnaca, here are a few hotels worth checking out.

If you prefer not to stay in a hotel, then there is also the option of staying in a private rental. There are a number of great options such as this seaside apartment in Limassol or this similar property in Larnaca. Click here to browse private rentals in Cyprus

Where to Stay in Limassol

Pefkos City Hotel – A family run mid-range hotel that is located close to the Old Town area. They offer a range of single, double and family private rooms with all guests having access to an outdoor swimming pool with terrace and a buffet breakfast included in the price. Click here to check their availability

Curium Palace Hotel – An upmarket hotel built in an impressive colonial-style, it is located only a few hundred metres from the nearest beach. There is a wide range of rooms available, with breakfast included, a swimming pool and restaurant on site Click here to check their availability

Not quite what you’re looking for? Click here to find other hotels in Limassol

Where to Stay in Larnaca

Mikes Kanarium City Hotel – A great mid-range hotel that offers private rooms for couples or families travelling with children. It’s centrally located meaning you can easily get to the beach or into the city centre. Breakfast is included in the daily rate. Click here to check their availability

Les Palmiers Beach Boutique Hotel – A trendy boutique hotel that is located right on the beach making it perfect if you’re coming to Larnaca for a beach holiday. There are a number of different private rooms available with modern amenities and breakfast included. Click here to check their availability

Not quite what you’re looking for? Click here to find other hotels in Larnaca

There are a number of fantastic places to stop when driving from Paphos to Larnaca that make it worth taking your time on the journey rather than simply getting the direct bus!

When travelling in Cyprus, it’s always a good idea to make sure you have a travel insurance policy so you’re covered for any unfortunate events! We like WorldNomads and always use them for our trips – click here to get a quote from WorldNomads

Are you planning on driving from Larnaca to Paphos or the other way around? Where do you plan on stopping? Let us know in the comments below! 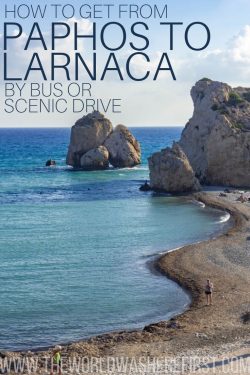 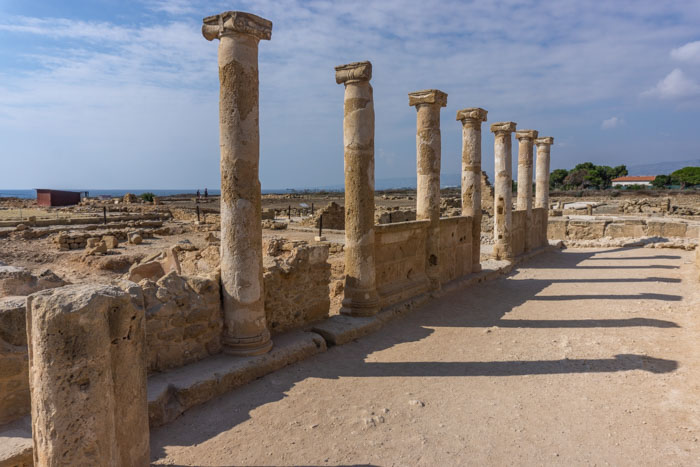 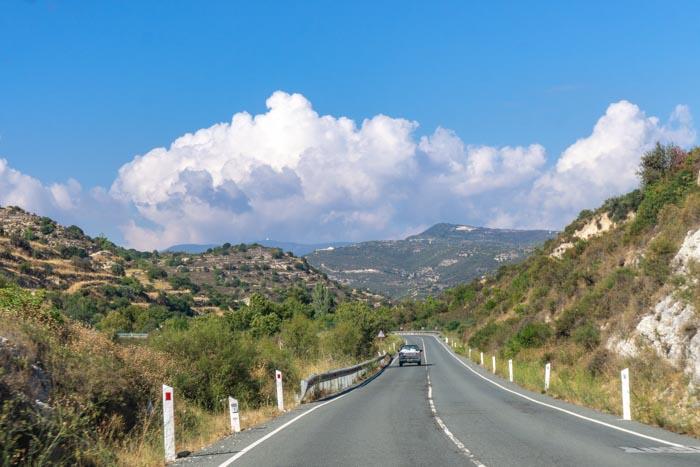 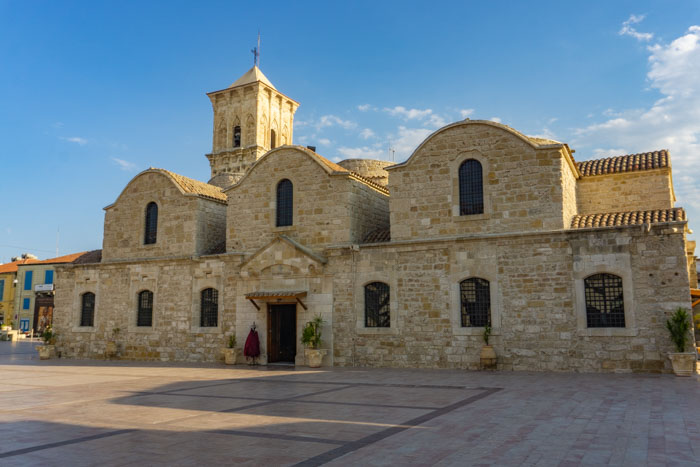