If you’re travelling overland through the Caucasus and plan to spend a few days in Armenia, chances are at some point you will make your way from Georgia to Armenia and then complete the route in reverse from Armenia to Georgia. As Armenia’s land borders with Turkey and Azerbaijan are closed, this is your only option if travelling overland unless you head to Iran.

While the most conventional way to travel between Georgia and Armenia is to take a marshrutka or night train between Yerevan and Tbilisi, it is possible to travel directly to Georgia from other cities in Armenia. This can prevent you from having to backtrack to Yerevan constantly and allow you to include some other less visited destinations on your Armenia itinerary.

On our recent trip to Armenia, we crossed from Georgia to Armenia by heading from Tbilisi to Gyumri – the second largest city in Armenia – and back from Armenia to Georgia by going from the mountain town of Dilijan to Tbilisi.

Planning a trip through the Caucasus and wondering what the best way is to travel between these destinations? Here’s what you need to know about travelling between Gyumri or Dilijan and Tbilisi!

There are three main options for travellers heading from Gyumri to Tbilisi: bus, train or driving.

There is one daily marshrutka that leaves from Gyumri to Tbilisi daily at 10:30 am. As there is only one bus a day, it is advised to get there at least one hour before departure to ensure you get a good spot. You could also try heading there the day before and booking a spot though I’m not sure if this route accepts reservations.

The journey time takes approximately 5-6 hours depending on the time at the border and how often your driver stops. We did this route in reverse from Tbilisi to Gyumri and our driver made a series of stops to pick up groceries in Georgia which added at least an hour onto the journey time!

This marshrutka goes through the Bagratashen – Sadakhlo Border Crossing. When you get to the Armenian side of the border, get out of the marshrutka and go through Armenian immigration. There is no need to take your bags with you. 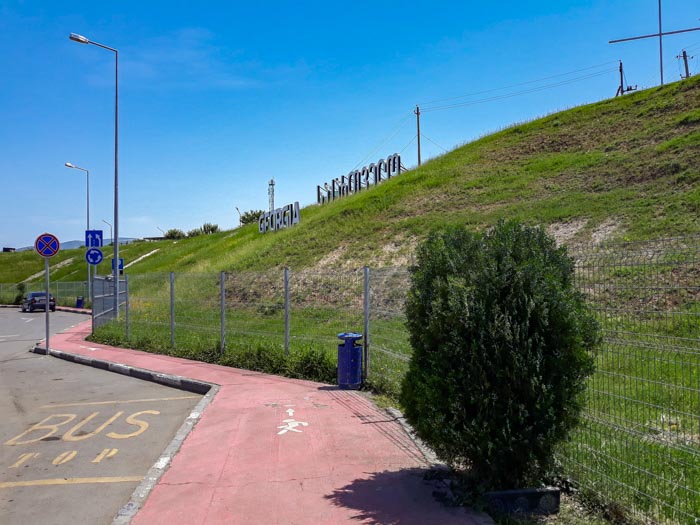 Once you pass through Armenian border control, the marshrutka will pick you up and drive you to the Georgian side of the border. You will be required to take your bags with you and then stamp into Georgia.

From there, it’s about 1.5 hours drive to Ortachala Bus Station in Tbilisi. A taxi from the centre of Tbilisi should cost you approximately 5GEL.

The Yerevan to Tbilisi night train passes through Gyumri so the train is also an option for travellers, though don’t expect a quality night’s sleep!

At the time of writing, the train from Gyumri to Tbilisi leaves at 12:25 am, arriving in Tbilisi at 7:39 am with the border crossing occurring at around 4:30 am. The train runs every other day and you can find the latest timetables on the Armenian railway website. Prices will vary depending on if you have a seat in an open carriage or a coupe.

Trains to Tbilisi arrive at the Central Railway Station which is next to Station Square Metro.

For travellers preferring to have their own wheels when exploring Armenia and Georgia, there is the option to rent a car and drive between these two cities. Keep in mind that the road conditions on the Armenian side are poor as you get close to the Armenia-Georgia border so you’ll need to be confident in dealing with unpaved roads.

To find deals on car hire, we recommend browsing on Rentalcars.com. Make sure to also take out an excess insurance policy through a third party like iCarHireInsurance to ensure you’re not liable to pay a hefty excess if you need to make a claim. 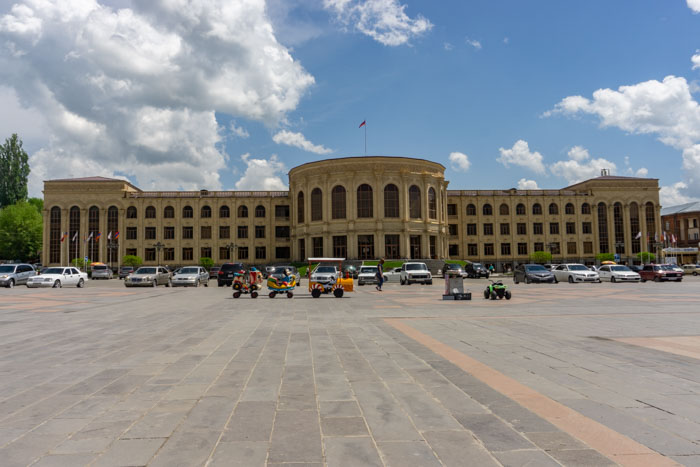 If you’re wanting to travel to Gyumri from Tbilisi then you are options are the same as outlined above.

The Tbilisi to Gyumri bus also departs daily at 10:30 am. Head to Ortachala Bus Station, follow the signs that say to Yerevan and go downstairs to buy your ticket from the booth. Tickets cost 25GEL per person and similarly to travelling from Gyumri to Tbilisi, you should get there at least an hour before departure to make sure you get a seat.

The sign on the bus says Leninakan in Cyrillic which was Gyumri’s name during the Soviet Union so don’t get confused when boarding the bus! The drivers and people at the bus station are all quite helpful so if you have any doubts just ask somebody! 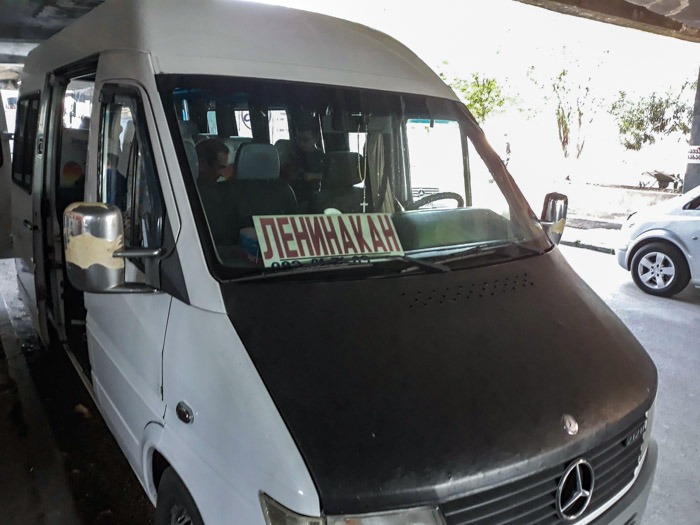 We were not questioned about previously been to Azerbaijan when crossing into Armenia. The bus will drive through the centre of Gyumri before going to the Bus Station so depending on where you’re staying in the city, it might make sense to ask to get out early.

Similar to travelling in the other direction, you need to be prepared for an early morning if travelling from Tbilisi to Gyumri.

At the time of writing, the night train from Tbilisi leaves at 8:20 pm, gets to the border at around 10 pm and arrives in Gyumri at 3:50 am. The train runs every second day and you can check the latest timetables here.

Much like taking the night train from Tbilisi to Baku, I’m not aware of being able to buy tickets online so you’ll need to head to the Railway Station a couple of days before departure to book your ticket.

The mountain town of Dilijan is a fantastic place to break up the journey from Yerevan if you want to enjoy a couple of days of hiking or relaxation surrounded by beautiful lush scenery.

When we first arrived in Dilijan, we were expecting to need to take a convoluted series of marshrutkas and taxis to get back to Tbilisi. However, when we walked into the Tourist Information Centre in Dilijan to inquire about the route, we were pleasantly surprised to find out that there is actually direct transport!

There are two minivans daily that travel from Yerevan to Tbilisi via Dilijan if booked in advance. We took the 8:30 am option as the other one left in the middle of the night at around 1 am. The helpful staff at the Dilijan Tourist Information Centre booked us two spots and told us to wait outside the UCom shop which is where you get dropped off if travelling from Yerevan to Dilijan. Tickets cost 6000AMD each and are paid directly to the driver. 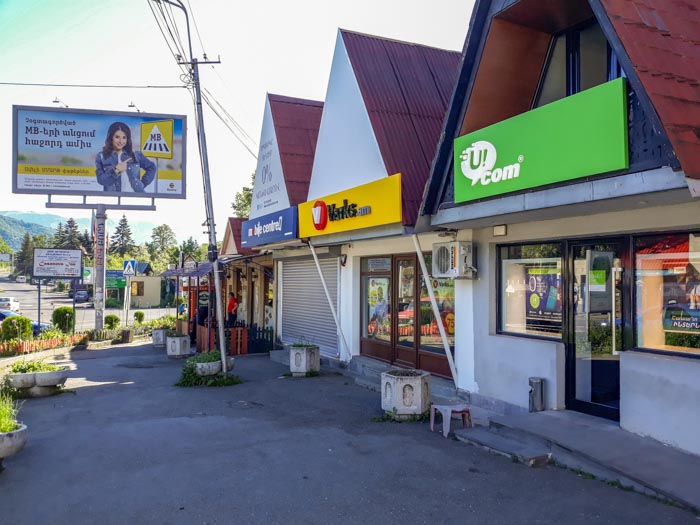 The bus arrived on time, stopped at a breakfast spot for 20 minutes and arrived in Tbilisi at around 1 pm. We got dropped off near Isani Metro Station and a taxi to the centre of Tbilisi cost about 6GEL.

There is a marshrutka that leaves from Vanadzor to Tbilisi daily at 8:30 am and costs 3500AMD. If you’re spending the night in Dilijan, you will need to take a taxi from Dilijan to Vanadzor which will cost around 4000AMD as I don’t believe the marshrutkas from Dilijan leave early enough to be able to catch the 8:30 am bus from Vanadzor.

Speak to your guesthouse or the Tourist Information Centre about booking the marshrutka from Vanadzor to Tbilisi in advance.

I’ll preface this section by saying we didn’t do this route but if we hadn’t found out about the direct route, this is what we would have attempted! If anybody, has done this route, please let us know in the comments below!

There are marshrutkas that run from Dilijan to Vandazor and Vandazor to Alaverdi. From Alvaverdi it’s about 40km to the Armenia-Georgia border where you would need to take a taxi. Once you cross the border on foot, it’s 5km (another taxi ride) to Sadakhlo where there are regular marshrutkas to Tbilisi.

At any point of this route, you can take a taxi to speed up the overall time it takes you to get from Armenia to Georgia with obviously the cost increasing. 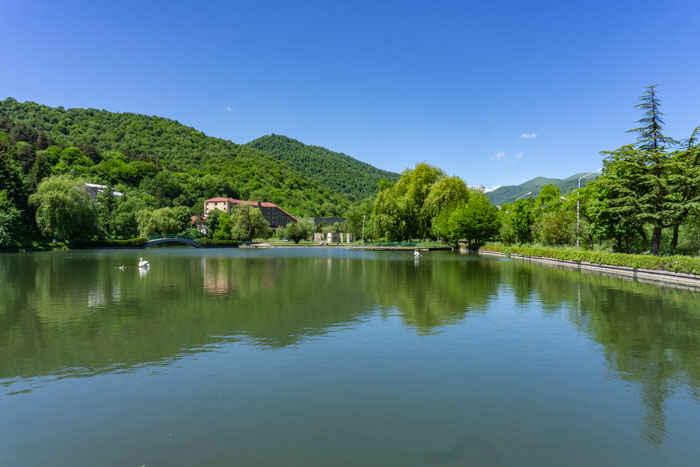 If you want to take a direct transport from Tbilisi to Dilijan, contact either tourist information centre as there should be private companies servicing this route.

There is also a marshrutka that leaves from Ortachala Bus Station in Tbilisi to Vanadzor at 9:20 am via Alvaverdi. From Vanadzor you can get a marshrutka or taxi to Dilijan.

While many travellers going from Armenia to Georgia only go between the capitals, it undoubtedly worthwhile to venture to some of the small cities in Armenia on your way back to Tbilisi!

Are you planning on travelling from Gyumri or Dilijan to Tbilisi? Have you been recently? Let us know in the comments below! 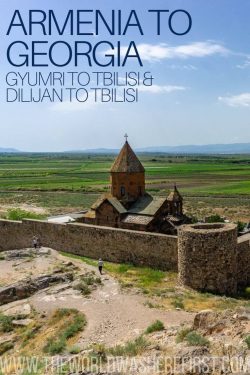 How To Get From Kutaisi to Tbilisi by Bus, Train or Taxi