For travellers spending some time exploring Georgia, one of the most common routes that you might at some point need to take is to travel from Kutaisi to Tbilisi. There are a number of transport options that you can take on this route or back from Tbilisi to Kutaisi route including bus, train or taxi.

It’s also important to consider whether you’re travelling from or to Kutaisi Airport rather than the centre of Kutaisi as this will impact the best transport option.

So what is the best way to get from Kutaisi to Tbilisi? This article outlines all the possible options to ensure you have a hassle-free trip between two of Georgia’s largest cities.

How to Get from Kutaisi to Tbilisi

For travellers spending some time exploring Kutaisi rather than transferring directly from the airport, there are three main transport options available: bus, train or taxi.

Kutaisi to Tbilisi by Bus

In our opinion, the best way to travel from Kutaisi to Tbilisi is by minibuses which are known locally as marshrutkas.

If you’re staying in the centre of Kutaisi, you can take a taxi to the bus station for approximately 4GEL. I recommend ordering a taxi through the Bolt App which works in the same way as Uber.

If you can’t get the app working on your phone, then ask your guesthouse or hotel to call a taxi for you. Tell the taxi driver you want to take a marshrutka to Tbilisi so he drops you off at the right part of the bus station.

The buses are incredibly well organised and once you arrive at the bus station, chances are that something will approach your taxi and load up your luggage into the appropriate minibus.

The ticket price is 15GEL and the marshrutka will leave when they’re full so you can arrive at any time throughout the day. We were lucky to be the last two passengers on our marshrutka and it departed as soon as we arrived!

Despite what you might otherwise expect, the marshrutka from Kutaisi to Tbilisi is incredibly comfortable with seats having enough legroom and multiple passengers not being forced to share seats. The journey time takes approximately 3.5 hours and there is a stop halfway through where you can use the toilet and buy snacks.

A couple of things to keep in mind when travelling by marshrutka in the Caucasus is that they will stop to pick up people along the way, so leave the seats next to the door clear when getting on. You should also make sure to keep an eye on your marshrutka when letting other passengers off to ensure it doesn’t drive off without you (this might or might not have happened to me…).

When arriving in Tbilisi, the bus will stop at Didube Bus Station which is located a few kilometres from the city centre. The cheapest option to get into the centre of the city is to head to the nearby Metro Station and hop on the train.

You will need to buy a travel card for 2GEL and then load credit onto the card. Each journey on the metro costs 1GEL and you can travel for 1.5hours after your first tap on.

If you don’t want to deal with hauling your bags on the metro, then taxis are also an affordable option. We paid 6GEL to get from the bus station to the centre of the city. You can order a taxi through the Bolt app or negotiate with one of the drivers at the station.

If you’re travelling from Tbilisi to Kutaisi, you can follow these instructions in reverse easily as there are also regular marshrutkas that leave from Didube Bus Station in Tbilisi heading to Kutaisi.

Kutaisi to Tbilisi by Train

For travellers who love to experience train travel in different countries, then there is the option of taking a train from Kutaisi to Tbilisi.

Departing from Kutaisi I Station every day at 12:00 pm, the journey takes approximately 5.5 hours and currently costs 9GEL (under USD$3.) You can walk to Kutaisi I Station from the centre of Kutaisi. The train station you arrive at in Tbilisi is located in Station Square, so you have the same options of either metro or taxi to reach the centre of the city.

The Georgian Railways website and mobile app allow tickets bookings in advance, however, you will need to sign up for an account in order to see the latest schedules and to book a ticket.

Given there is currently only one train a day, the marshrutka is a much more convenient and quicker option so I would only recommend taking the train if you really want to have the experience of regional train travel in Georgia!

Going in the order direction from Tbilisi to Kutaisi by train, the daily train departs at 8:50 am from Tbilisi and arrives in Kutaisi at 2:55 pm.

Kutaisi to Tbilisi by Taxi

The final option for travelling from Kutaisi to Tbilisi to organise a private or shared taxi.

Prices will start at approximately 180-200GEL per taxi, so even split between four people, the marshrutka is a much more affordable option. One reason why you might want to consider a taxi if your Georgia trip budget allows it is to take some stops along the journey.

One convenient stop from Tbilisi to Kutaisi is the town of Gori which is just off the main road that connects the two cities. Gori is famous for being the birthplace of Stalin and stopping along the way can save time on your overall Georgia itinerary if you don’t want to visit Gori as a day trip.

The distance from Kutaisi to Tbilisi is 230km and will take approximately 3.5 hours to drive.

For travellers taking advantage one of the many affordable Wizz Air flights that now fly to Kutaisi Airport, then there are a couple of options if you want to head straight to Tbilisi after your flight arrives.

Kutaisi Airport to Tbilisi by Bus

Once you clear customs at Kutaisi Airport, head to the booths near the exit and look for the company called Georgian Bus. They operate large buses from Kutaisi Airport to Tbilisi which is timed to depart after flights arrive. Tickets cost 20GEL one way or 36GEL if you buy a return ticket.

The journey to Tbilisi takes about 4 hours and drops you off in the centre of Tbilisi at Liberty Square. If you’re staying in the city centre, you might be able to walk to your accommodation from Liberty Square or alternatively take the metro or a taxi.

Georgian Bus also operates buses to Batumi from Kutaisi Airport as well as a marshrutka to the centre of Kutaisi which drops you off close to your address for 5GEL.

Next, to the Georgian Bus booth, you will also find representatives for BeeLine and MagtiCom which are two of the major cell phone companies in Georgia.

They offer a range of prepaid SIM cards, including some with data only that you can directly purchase from them. It does tend to be cheaper to buy a SIM card directly in town if you can wait but if you want data on your journey to Tbilisi, it’s possible to get it directly at the airport instead.

Kutaisi Airport to Tbilisi by Train

In May 2022, it was announced that Kutaisi Airport will be served by a train departing from nearby Kopitnari train station with a shuttle available between the airport and the train station.

Unlike, the bus, the train isn’t timed to coincide with flight arrivals and there are only a few trains per day so it’s not as good of an option as taking Georgian Bus directly from the airport.

Kutaisi Airport to Tbilisi by Taxi or Car

Your first option for travelling to Kutaisi Airport to Tbilisi by car if you don’t want to drive yourself is to take a private transfer. This is obviously a more expensive option than the bus but will allow you to leave as soon as you get out of the airport and will drop you directly at your accommodation. You can book a private transfer here.

If you’re planning on spending some time in Georgia and are considering renting a car, then it is possible to organise a car rental from Kutaisi Airport and then drive directly to Tbilisi.

For low prices, you can rent direct from locals using Localrent which connects private individuals with cars to drivers.

Where to Stay Along the Way

Wondering where to lay your head either before or after your trip from Kutaisi to Tbilisi? Here are some recommendations for both cities.

Where to Stay in Tbilisi

Guest House Rampa – A budget guesthouse located in the Old Town near the Sulphur Baths. They offer private single rooms and double rooms along with shared kitchen facilities and helpful staff that will help you during your time in Tbilisi. Click here to check their availability

Hotel Sololaki – A boutique hotel also located near Liberty Square this is a good option if you’re after a comfortable mid-range hotel, close to where the bus drops you off. They offer large rooms with all the expected amenities with breakfast included in the daily rate. Click here to check their availability.

Not quite what you’re looking for? Click here to browse other hotels in Tbilisi.

Where to Stay in Kutaisi

Pospolita Guesthouse – A small family run guesthouse that offers a few different rooms located near the White Bridge. This is a great budget option for travellers, with a large breakfast included daily and very friendly owners. Click here to check their availability

Hotel Veneto – A comfortable hotel located in the centre of Kutaisi that offers a range of private rooms suitable for solo travellers and couples. Breakfast is included in your daily rate and the staff can help organise trips in the surrounding area. Click here to check their availability

Not quite what you’re looking for? Click here to browse other hotels in Kutaisi!

Travelling from Kutaisi to Tbilisi is a relatively straight forward journey no matter what option you choose though we think the best way is to either take the marshrutka from the centre of Kutaisi or Georgian Bus from Kutaisi Airport.

Looking for travel insurance before visiting Georgia? World Nomads offers flexible and simple travel insurance policies with coverage for more than 150 activities that you can buy or extend while on the road.

Are you planning on travelling from Kutaisi to Tbilisi? Have you been recently? Let us know in the comments below! 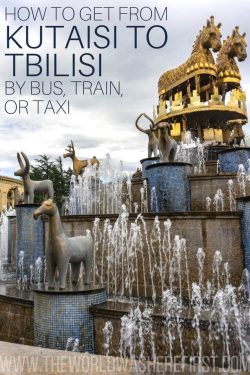 How to Travel from Tbilisi to Batumi by Bus, Train, Taxi or Flight

Is Georgia Safe? Top Things to Know About Safety in Georgia