One of the most common ways to enter Azerbaijan for travellers going overland is to travel from Georgia to Azerbaijan. During our time in the Caucauses, we crossed the Georgia-Azerbaijan border twice: once on the night train from Tbilisi to Baku and then from Sheki to Signhaghi which follows essentially the same route as going from Sheki to Tbilisi.

If you’re planning on travelling either of these routes in the near future, here’s a recap of our experience during both border crossings and some tips to keep in mind when travelling from Georgia to Azerbaijan or vice-versa.

The best and most comfortable way to get from Tbilisi to Baku is by train. At the time of writing, the train leaves from Tbilisi at 8:35 pm and arrives in Baku the next day at 9:00 am.

As far as I’m aware, there’s no way to buy tickets for the Tbilisi to Baku train online. So in order to buy tickets, you need to head to Tbilisi Railway Station and purchase them there.

The train station is located next to Station Square Metro and once you get out of the metro station, simply turn left and head to a large building next door called Tbilisi Central. When you enter, take the escalator right to the top floor, get a number from the ticket machine and then wait for your turn.

The most popular ticket options for travellers are 51GEL (~€16) for a bed in a four-bed coupe (second class) or 87GEL (~€28) for a bed in a two-bed coupe (first class). We opted for two seats in first class and bought our tickets. Make sure you take your passport with you as it is required to purchase the tickets.

We bought our tickets four days before travelling and all seat options were still available. If you are set on a particular type of seat it’s worth buying tickets a few days in advance, though on the day of departure, we heard people buying second class tickets for the next day so it seems it is possible to get last minute tickets as well! 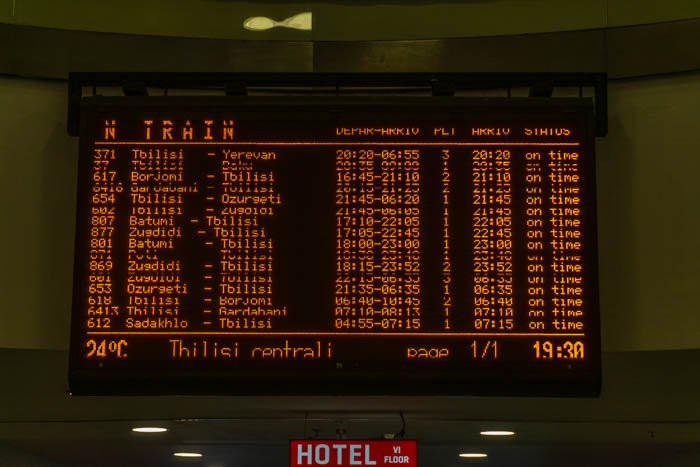 Waiting for our train from Tbilisi to Baku

Boarding the Tbilisi to Baku Train

We arrived at Tbilisi Central about one hour before the train departure and as there is no food available on the train, we were keen to get dinner and some snacks for the 13-hour ride.

While there are typically a few places you can get food at Tbilisi Central, we didn’t account for the fact that it was Orthodox Easter and everything was closed! Luckily there was one snack booth and a couple of bakeries near the metro station that allowed us to get some lobiani (bread stuffed with beans) and water for the train!

Our train left from Platform 1 and the entrance is located on the floor below where you buy tickets. We boarded the train about 30 minutes before departure, with the attendant checking our tickets and passports.

In our first class cabin, we found pillows, blankets and a mattress pad folded on our seats. A little while later, the attendant came in with a bag of sheets for both of us. We were also able to store our luggage below the seats.

As we settled into our seats and put the latest Game of Thrones episode to watch, the train rolled out of Tbilisi on time at 8:35 pm. 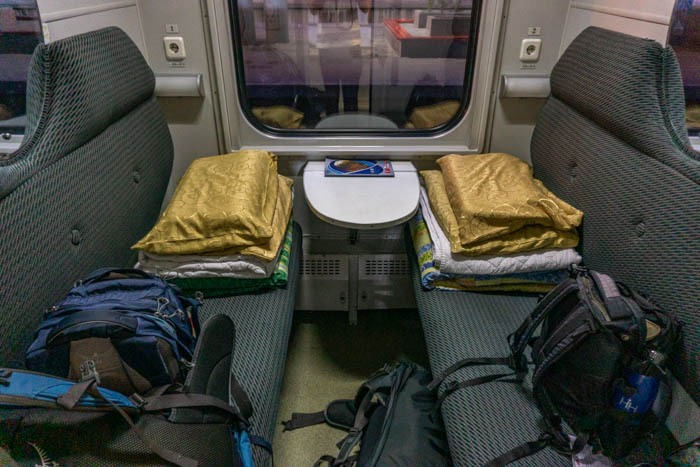 Our home on the Tbilisi to Baku train

One of the best things about taking the Tbilisi to Baku train is the fact that the border crossing gets done quite early into the journey, meaning you have time to get a decent night’s sleep!

About an hour after leaving, we arrived at the Georgia-Azerbaijan border. If you close your door, the attendant will knock to let you know once you’ve arrived.

A Georgian border guard will come into your cabin, check your passport, ensure you have an Azerbaijan visa if you need one and then take your passport off the train to get stamped. Expect to spend about an hour on the Georgian side of the border while you wait for your passport to be returned. During this time, you can get off the train if you want.

During our time at the Georgia-Azerbaijan border crossing, the train attendant handed me a customs form that was in the Azerbaijani only. There were a number of people in our carriage who weren’t from Azerbaijan and couldn’t understand the form (including the attendant herself!) and she just told us to not to worry about filling it out and to explain to the border guard that you don’t understand it. The form never came up during our time with the Azerbaijani border guards.

After we got our passports from the Georgian border guards, we travelled for about 10-15 minutes on the train until we reached the Azerbaijan side of the border. The border guards eventually came into our cabin and collected our passports and visas. They then set up a booth at the end of the train carriage and the attendant called us in one at a time to have our photos taken and get our passports stamped.

Despite reports that we had previously read about the Tbilisi to Baku train, neither of us were asked by any questions by the guards and our bags weren’t searched. We hadn’t travelled to Armenia yet but even other travellers that we met that have been to Armenia, haven’t had any trouble of the border.

One person didn’t even get asked about it and the other just got asked why she had been there and they were satisfied when she replied ‘tourism’. As long as you haven’t been to Nagorno-Karabakh (also known as Artsakh), you shouldn’t have any problems entering Azerbaijan.

We spent about another hour on the Azerbaijan side of the border and left at about midnight, giving us time for around 8 hours of sleep!

At around 8 am, the attendant knocked on our carriage door, informing us that we were approaching Baku and that it was time to get up! They want to collect your sheets about 30 minutes before you arrive in Baku so once you’re up, make sure to take them off and get them ready for collection. The bathrooms will also be closed about 20 minutes before arriving so don’t leave it until the last minute to use the bathroom.

You can request coffee or tea from the attendant in the morning. If you do so, keep in the mind that it is customary to tip them something for your drink. Consider it a good opportunity to get rid of any excess Georgian Lari coins you might be carrying! In case you forget about this and don’t speak Russian, chances are the attendant will recruit somebody that speaks English to inform the passengers about the tipping, which might or might not have been my role as we arrived into Baku!

At 9 am, we rolled into Baku Central Railway Station. The train station is connected to 28th May metro station where you can pay 0.5AZN (~€0.25) for a single ride. There didn’t appear to be any ATMs in the Central Station, however, there were places to exchange money with reasonable rates. If you’re after an ATM, you can exit the station and walk across to 28 Mall. 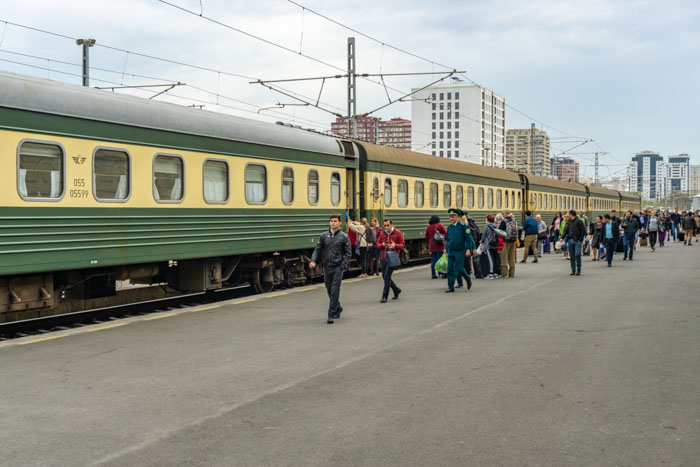 The Tbilisi to Baku train arriving in the Azeri capital

After spending a few days exploring Baku and then travelling from Baku to Sheki, we planned to once again cross the Azerbaijan-Georgia border. We ended up travelling from Sheki to Sighnaghi but as it’s essentially the same route as Sheki to Tbilisi, I thought that I’d break out how you would undertake both journeys should you find yourself travelling from Azerbaijan to Georgia.

There are no direct buses from Sheki to Tbilisi so if you want to use public transport for this route, then the easiest option is to first head to Qax and then get a bus from there to Tbilisi.

Unfortunately for us, after arriving in Qax on the 11:30 am bus, the 1 pm bus to Tbilisi arrived and only had one seat remaining. Despite the bus driver insisting I could go and leave Maggie behind to find another way, we opted to stick together and investigate other options for getting from Sheki to Tbilisi.

If you want to take the bus from Qax to Tbilisi, then ask your guesthouse to call and book you a spot! 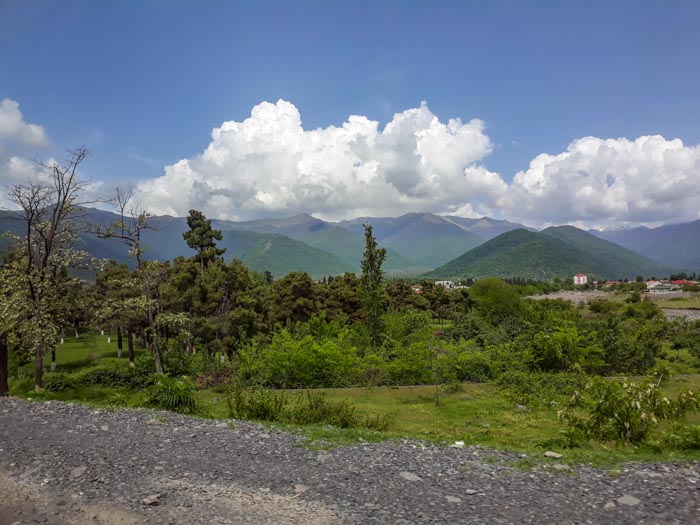 The view driving to the Azerbaijan-Georgia border

If you can’t make it on the Qax to Tbilisi bus and want to avoid taxis for the majority of your journey, then it is possible to make it from Sheki to Tbilisi by a series of marshrutkas.

From Balakan, you will need to take a taxi to the border which is approximately a 15-minute drive. Due to us not being able to get on the Qax to Tbilisi bus, we ended up taking a taxi from Qax to the border for 30AZN (~€16). If you make it to Balakan by bus, then I would expect a taxi to the border to not cost more than 10AZN and possibly less if you can negotiate!

After crossing the Azerbaijan-Georgia border, take a taxi from the border town to Lagodekhi where there are marshrutkas and shared taxis leaving throughout the day to Tbilisi. 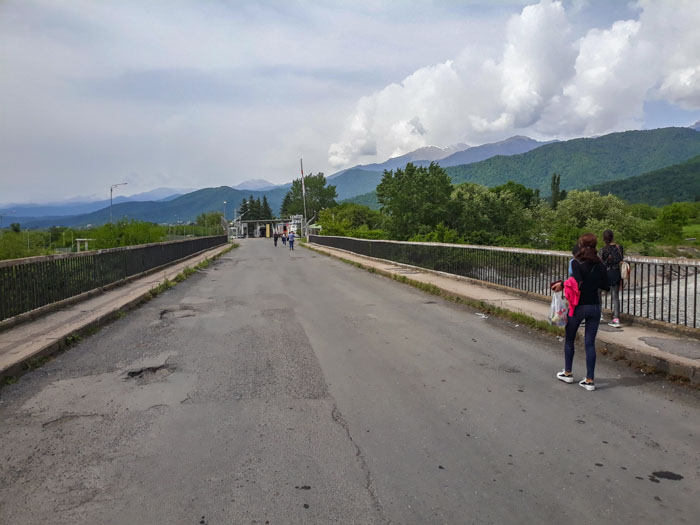 No man’s land after leaving Azerbaijan

Option 3: Sheki to Tbilisi by Taxi

If you want to reduce your time in marshrutkas then you can take any of the above segments by taxi. In Sheki, we were quoted 50AZN (~€26) to get to the Georgian-Azerbaijan border. We paid 30AZN (~€16) to get from Qax to the border so you can clearly reduce your overall Azerbaijan trip cost by taking a marshrutka or two.

Once you cross the Azerbaijan-Georgia border, it is possible to get a taxi all the way to Tbilisi however it will probably be cheaper to go first to Lagodekhi. That’s because there are more taxi drivers there and it also increases the likelihood of finding other passengers to share a taxi with. The Lagodekhi tourism board quotes around 12GEL per person in a shared taxi which would mean you can probably get a private taxi to Tbilisi for around 50-60GEL. 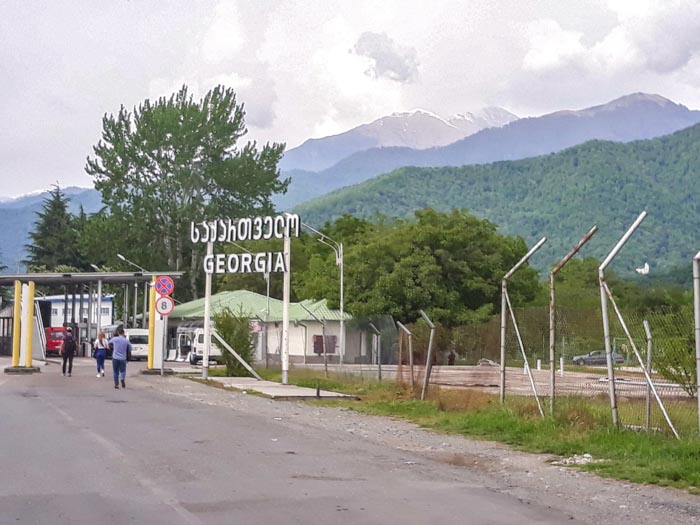 If you want to travel from Sheki to Sighnaghi then your options are essentially the same as outlined above. The main difference compared to going from Sheki to Tbilisi is that when travelling from the Georgia-Azerbaijan border towards Tbilisi you need to get off at Tsnori which is about 7km from Sighnaghi.

You can also take a taxi directly from the Georgian-Azerbaijan border to Sighnaghi which will cost up to 50GEL.

Whether travelling from Tbilisi to Baku or Sheki to Tbilisi, it is relatively straightforward to cross the Georgia-Azerbaijan border and makes for a great way to travel between these two countries.

Are you planning on travelling from Georgia to Azerbaijan? Have you been recently? Let us know in the comments below! 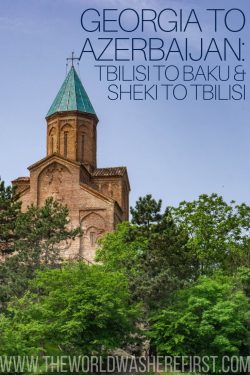 Where To Stay in Baku, Azerbaijan: Best Hotels & Hostels

Armenia to Georgia: Gyumri to Tbilisi & Dilijan to Tbilisi