In exchange for writing this ClaimCompass Review, ClaimCompass waived their commission for our claim. All opinions are our own.

When it comes to travelling, there are few things more frustrating than a delayed or cancelled flight. Not only does it leave you with you less time to enjoy your destination, but it might also mean hours of waiting time at the airport.

In July 2018, we, along with hundreds of other passengers, were left stranded in London when AirBaltic first delayed and later cancelled our flight to Tallinn. Some passengers were lucky and managed to get put on a flight first thing the next morning. Our substitute flight, however, resulted in us landing in Tallinn 27 hours after we were supposed to and included transferring airports in London and a stopover in Copenhagen.

While most travel insurance policies will cover you for additional expenses that you incur as a result of a cancelled flight, in 2014 the European Union passed a regulation that entitled passengers to additional compensation. Flight Compensation Regulation 261/2004 or for short EU261 entitles passengers to between €250 to €600 if their flight meets certain criteria.

Why We Used ClaimCompass

EU261 allows passengers to receive compensation directly from the airline if your flight is eligible. However, it should come as no surprise that many airlines don’t fancy paying hundreds of passengers compensation after a delayed or cancelled flight and, therefore, try to make the process as difficult and bureaucratic as possible.

This is where ClaimCompass comes in.

They focus entirely on understanding all the ins and outs of the EU261 regulation and how to deal with airlines to ensure passengers receive what they are legally entitled to. In addition to their expertise in EU261, we decided to claim through them for a number of reasons.

1. ClaimCompass make it easy to understand your rights

EU261, like most laws and regulations around the world, has a significant amount of nuance to it. There are different degrees of compensation that you can receive depending on factors such as how long your flight was delayed for, your flight distance and destination, how long after a cancelled flight you arrived at your destination, whether you flew an EU or non-EU carrier, how much time has passed since your flight and much more!

Luckily, ClaimCompass make it extremely easy to understand what your rights are by creating an online flight delay compensation calculator.

It allows you to input your flight details and will tell you whether or not you are eligible to claim and how much compensation you could receive. This service is available to use for everybody, regardless of whether you claim through them or not. If you have a flight you want to check, simply click this link or put your details into the flight delay compensation calculator below!

2. They take care of everything

Once you fill in the details of your flight and submit your claim through their simple online claim process, ClaimCompass take care of everything. This means that all contact with the airline is handled through them and they will fight for your right to receive compensation.

If you try to claim through the airline directly, not only will this take up considerably more of your time but you will also have to deal with airlines playing every trick in the book to try and avoid paying you your compensation.

ClaimCompass have processed thousands of claims and know every stalling tactic or legal loophole that airlines will try to use to get out of paying. This means you can have a lot more confidence that if you are to receive compensation, you will actually end up with money in your bank account!

3. If your claim is unsuccessful, you owe ClaimCompass nothing

Arguably the best reason to claim through ClaimCompass is that you have nothing to lose! Their business model is such that you only owe them 25% of your compensation if your claim is successful. If your claim is unsuccessful, you owe them nothing.

This means that the interests of ClaimCompass are completely aligned with the passengers. Simply put, they don’t get paid if you don’t!

How to Claim for a Delayed or Cancelled Flight with ClaimCompass

To give you an idea on what to expect when claiming through ClaimCompass, we’ve outlined the exact step by step process for how to claim for a delayed flight with ClaimCompass and our personal experience of how the claim process went.

As mentioned earlier, ClaimCompass have an online tool that allows you to determine what compensation you are entitled to. You’ll need to provide some basic details about your flight such as flight number, date of your flight and how late you arrived at your destination. It takes a couple of minutes to fill out the details and ClaimCompass will then instantly tell you what amount you could be eligible to receive.

After you’ve determined your eligibility for compensation, you will need to fill out some additional details in order to submit your claim. This will include basic items such as your name, contact information and agreeing to ClaimCompass’ terms and conditions. Once that’s done you will receive confirmation that your claim has been submitted.

Once you’ve submitted your claim, a member of the ClaimCompass team will review all your details before proceeding with your claim and confirm whether they need any additional information.

After we submitted our claim, ClaimCompass reviewed all the details within one working day and confirmed that we were eligible to receive compensation. We were then also required to upload our flight documents and passport information as well as sign a Power of Attorney to give ClaimCompass the right to claim on our behalf.

After this was submitted, our claim had been officially lodged. We were also given access to an online portal so we can check the status of our claim and were emailed every time there was a change.

4. ClaimCompass Request a Statement from the Airline

After your claim is lodged, ClaimCompass will contact the airline and request a statement from them to do with your compensation. Three weeks after we lodged our claim, we received a notification from ClaimCompass that AirBaltic had issued an official statement that they were seeking to exonerate itself from liability due to a third party issue.

ClaimCompass informed us that this meant that they were trying to avoid paying us due to AirBaltic claiming that the issues causing the flight cancellation being outside of their control.

ClaimCompass then confirmed that their claim managers were investigating to ensure that our rights were being respected.

Seven weeks later, we received another notification from ClaimCompass that their legal team had reviewed our claim and had responded to AirBaltic’s official statement to request more information.

They noted that our claim was still ongoing and they were trying to validate whether or not compensation was due.

6. The Claim is Escalated to Legal Team

Two months later, we were informed that while ClaimCompass had been attempting to reach a settlement with AirBaltic directly, they had been idle and non-compliant. Therefore, ClaimCompass had assigned the claim to their legal team who were going to file the required documentation in order to present the case to the National Enforcement Body who had the power to sanction the airline directly.

A couple of days later, a member of the ClaimCompass legal team contacted us to request some additional documentation.

Seven weeks later, ClaimCompass sent us an e-mail to inform us that they were going to use the European Small Claims Procedure to push forward our claim. They sent us the legal forms to review and sign.

We e-mailed back and forth with the legal team a couple of times as we had some questions. However, before we got a chance to sign the documents, we received some unexpected news…

8. Our Claim was Successful!

Approximately six months after we originally filed the claim, ClaimCompass notified us that they had reached a settlement with AirBaltic and we would be paid. This proved to us that ClaimCompass were consistently working in the background to explore every possible avenue to ensure that we got the compensation we were entitled to.

ClaimCompass submitted our bank details to AirBaltic who then proceeded to take about 6 weeks to pay us.

All in all, from the time we submitted the claim, it took us 8 months to receive our compensation. It is possible to receive your funds much sooner if the airline agrees to pay it out quicker without dragging out the process.

The process of claiming EU261 compensation through ClaimCompass was ultimately very straight forward and easy to do. The amount of pushback that ClaimCompass received from the airline leaves me in no doubt that there is absolutely no way we would have received any compensation if we had filed our claim directly with the airline.

Furthermore, aside from having to provide some additional documents or review paperwork from ClaimCompass, nothing was needed from us after the claim had been filed. ClaimCompass took care of everything and always emailed us when there was an update on our claim.

This essentially means that we received €300 each (€600 total) for a few minutes of work in filing a claim! Not too bad at all!

If you have had the unfortunate experience of a delayed or cancelled flight, then we have absolutely no hesitation in recommending ClaimCompass to process your claim. You can click here to begin the claim process or use the box below!

Did you find this ClaimCompass review useful? Are you wondering how to claim for a delayed flight? Let us know in the comments below! 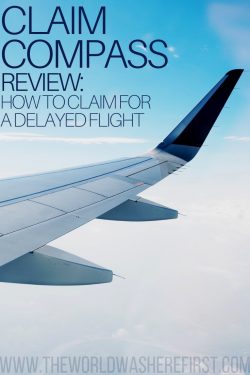 Rentalcars.com Review: The Best Way To Hire A Car

Omio Review: The Best Way to Book Transport in Europe?

GetYourGuide Review: An Easy Way To Book Tours in Europe