Rakija (or rakia) is considered to be the national drink of the Balkan nations. Notorious for its high alcohol content and easy drinking culture, no trip to the Balkans is complete without sampling this intoxicating liquor at least once. Though it is certainly famous amongst the heavy-drinking Balkan backpacker crowd, travellers of all shapes and sizes should learn how to drink rakija in order to gain a more broad understanding of local culture and customs.

One of the best ways to get to know a culture is through its food and drink and learning about what rakija is and how to drink it is an important part of any trip through the Balkan nations. When visiting any of the Balkan countries, it is inevitable that you will come across this spirit in more than one instance and it is imperative that you know how to drink it when you do!

Rakija is a kind of fruit brandy native to the Balkan peninsula and you will be hard-pressed to escape the region without at least being offered the beverage. You will find it on every drinks menu, bottles line the shelves in supermarkets and liquor stores, and most everyone has a family member who makes it himself. The most popular variation of the brandy is slivovica, or plum rakija, but it is common to find it made from everything from grape, apricot, quince, and fig.

Drinking rakija in the Balkans is surrounded by ritual. For instance, it is customary at a wedding for the groom’s father to go around to all of the guests and offer them a shot of rakija.

It is also traditional to offer it to any guest in your home, which is why, if you will be staying at a locally owned hostel, guesthouse, or B&B, you will not be able to avoid it! Michael had a hostel worker chase him around insisting he have his welcome shot at 10 AM when he checked in. I had to politely decline when I essentially had it forced on me when I had a cold, told that because it was infused with honey it was “medicine.”

How is Rakija Made?

Though you can certainly get mass-produced bottles of rakija from a supermarket or a liquor store throughout the Balkans, the majority of rakija is made at home and locals will assure you that the homemade stuff is the right one to drink. Regardless if it’s distilled in a back garden or in a commercial setting, however, the process is more or less the same.

Rakija is usually made from overripe fruit (most often plums, however, really any fruit will due) that is collected and mashed so the juices are released. After that, it is left to ferment for a number of weeks — usually 3 weeks if making it in the warm late summer, when it is most common.

Once the fermentation is complete, the mash is diluted and boiled down twice then transferred to barrels or other receptacles to age further and develop the flavours. This process lasts for a month minimum, however, the better rakijas are aged for longer.

During the ageing period, sometimes other flavours are added to the rakija in order to develop its flavour further. The most common additive to rakija is honey, which produces a sweet and easy to drink liquor known as medica.

Rakija, both homemade and commercially produced, generally contains around 40-60% alcohol by volume, however, it is more common for homemade rakija to be more potent. The liquor goes down quite easily, so make sure to pace yourself when drinking as you never know how strong it will be!

How to Drink Rakija

There is a distinct protocol when it comes to drinking Rakija, and if you don’t want to make a social faux-pas, follow these rules on how to drink rakija properly and you will survive any Balkan trip while seeming like a local!

The citizens of the Balkans have a superstition about making eye contact when first toasting and they are very serious about it. It is considered to be bad luck to break eye contact while taking the first drink.

When you are offered a shot, clink glasses as is customary and say “živeli” (zhee-ve-lee, “cheers” in the Serbo-Croatian language. Say “na zdravje“ if you’re drinking rakija in Slovenia and “nazdrave” in Bulgaria) and make sure you are looking your drinking partners in the eye! Maintain eye contact until you have taken the first drink!

Step Two: You are not doing shots!

Contrary to local spirits like chacha in the Republic of Georgia, you don’t drink the small glass of rakija in one go. In fact, the beverage is most often drunk as a digestif and while you may have more than one, it is not customary in the slightest to knock it back in one gulp.

Rakija is traditionally served in a small glass with a very narrow neck and a more bulbous bottom. Drinking from a glass like this actually makes it quite difficult to drink rakija as if you’re doing a shot.

Don’t be ashamed if you didn’t know to sip it before your first foray into rakija drinking, however. Many people before you have made this mistake as well and it’s not until later that they learn that rakija is meant to be sipped and savoured, not down like a tequila shot at a hen do.

The first sip is meant to be taken slowly and as it generally has quite a high alcohol content — it is altogether wiser to pace yourself while drinking, anyhow. A glass of rakija should be enjoyed in quite a few sips.

Because let’s face it: you’re in the Balkans and you can’t find rakija anywhere else! You’ve gotta savour what you have while you have it! Živeli!

Where to Drink Rakija

You can find rakija virtually anywhere in the Balkan countries, but the spirit is considered to be the national drink of Serbia and the term Serbian Rakija is actually protected by the EU. And while you certainly can (and likely will!) drink rakija is Croatia, Montenegro, and Bulgaria, Serbia is an excellent place to learn more about the spirit first-hand.

In Belgrade, you will likely be served some rakija if you’re going on something as simple as a walking tour of the city. It is also recommended to have a glass or two after enjoying a traditional meal at a kafana or at one of the many bars in the city.

Craving rakija but can’t make it to the Balkans? Click here to buy a bottle of rakija online!

Learning about how to drink rakija and how rakija is made is one of the best things about travelling in the Balkans. The local spirit is so important in Balkan culture and cuisine that no trip to any of the Balkan nations would be complete without sampling rakija at least once or twice!

Have you tried rakija? What did you think? Let us know in the comments! 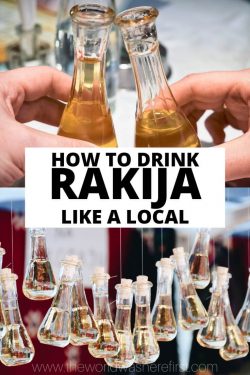 What To Do In Ohrid: The Jewel of Macedonia

Is Dubrovnik Expensive? A Guide to Prices in Dubrovnik