With Wizz Air flights to Kutaisi from all over Europe, more and more travellers are starting or ending their Georgia itinerary in the third-largest city. This means that travellers who want to spend some time at the Black Sea are looking for the best way to get from Kutaisi to Batumi or back from Batumi to Kutaisi.

Wondering about how you should travel between these two cities? Let us break down all the possible options for this route including by bus, train, taxi or car and the best way to get directly from Kutaisi Airport to Batumi or back.

How to travel from Kutaisi to Batumi

Like almost everywhere in Georgia, Armenia or Azerbaijan, the easiest way to travel between cities are local minibuses known as marshrutkas. If you’re in the centre of Kutaisi, it will cost around 4GEL to get to the main bus station. You can use the Bolt Taxi app to order a taxi or, alternatively, ask your guesthouse or hotel to call one for you.

Tell your taxi driver that you want to go to Batumi and they will drop you off at the exact location where the marshrutkas depart. This is the same place that you would go if you want to travel from Kutaisi to Tbilisi.

The bus from Kutaisi to Batumi costs 15GEL and they depart regularly throughout the day when full. The journey time is around 2.5-3 hours and you will pay the driver when you get on board.

In Batumi, you will get dropped off in the central bus terminal which is where marshrutkas depart regularly to other cities in Georgia. If you need to get a taxi in Batumi, then you’ll need to use either the Bolt or Yandex taxi apps.

If you’re travelling from Batumi to Kutaisi by bus then the marshrutkas also depart regularly when full.

While there used to be a regional train that ran between Kutaisi and Batumi, it is no longer listed on the Georgian Railways website.

Regardless, it was never the most convenient option as there was only one train per day on this route.

You can take the train to Batumi from nearby Kopitnari train station which is located near Kutaisi Airport however there are only a few trains per day so the bus is the more convienant option.

If you prefer to take a taxi from Kutaisi to Batumi then expect prices to start at around 150GEL for a whole taxi though this is obviously negotiable depending on the mood and urgency of the taxi driver.

You can also find shared taxis departing from the bus station where you would just pay for a seat in the taxi for a fraction of the whole price.

As the marshrutkas are fairly comfortable on the main routes in Georgia, I would advise against taking the taxi unless you’re planning on arranging stops along the way.

A great way to see Georgia is by renting a car and having the ultimate freedom to stop when travelling between major cities. If travelling from Kutaisi to Batumi by car it’s possible to detour to a number of places such as Prometheus Cave or Martvili Canyon.

You could also consider spending a few days in the Svaneti Region, basing yourself in Mestia and enjoying some day hikes or even tackling the Mestia to Ushguli Hike!

There aren’t many options for car rental in Kutaisi, so you’ll have more choice by renting from a local through Localrent which connects private car renters with drivers.

If you’re arriving at Kutaisi Airport and want to head straight to Batumi then you’ll be happy to know that there is no need to head into the city centre. Georgian Bus operates full-size coaches that are timed to depart with flight arrivals. You can book a spot in advance online or once you clear customs, simply look for the Georgian Bus booth and buy a ticket.

Tickets cost 15GEL with the journey taking around 2 hours. In Batumi, you are dropped off in the centre of town and there is a 10% discount if you book a round trip from Batumi to Kutaisi as well.

As mentioned previously, there are also trains running from nearby Kopitnari Train Station but as there are only a few trains per day, it’s not as convenient as taking Georgian Bus.

If you’re planning on spending a few days in Kutaisi then you can also book a minibus with Georgian Bus from Kutaisi Airport to Kutaisi centre for 5GEL which will drop you off close to wherever you’re staying.

When organising your transport from Kutaisi Airport, it’s also a good opportunity to pick up a local SIM card as the two major telecom companies – BeeLine and MagtiCom – have booths next to Georgian Bus. It took us about 10 minutes to organise a SIM card from Beeline when we arrived which can later be recharged online.

Where to Stay in Kutaisi or Batumi

Wondering about the best places to stay at the start or end of your journey? Here are some recommendations for accommodation in Kutaisi and Batumi.

Where to Stay in Kutaisi

Pospolita Guesthouse – A family-run guesthouse in the centre of Kutaisi that offers a few different private rooms and is a great choice if travelling in Georgia on a budget. The owners are incredibly friendly and there is a great breakfast served every morning.  Click here to check their latest prices

Guesthouse Panorama — Another great budget family-run guesthouse that offers private rooms most suitable for couples. Breakfast is included in the daily rate and you are within walking distance of all of Kutaisi’s main attractions.  Click here to see their latest prices

Hotel Veneto – A modern hotel located in the centre of town. They offer a range of private rooms including single rooms suitable for solo travellers and larger rooms that can accommodate families. Breakfast is included in the daily rate and the hosts can organise transfers and tours. Click here to check their availability

Not quite what you’re looking for? Click here to browse other hotels in Kutaisi!

Where to Stay in Batumi

Dzveli Batumi — A boutique hotel that is located a couple hundred metres from the beach and within walking distance of the centre of Batumi. They offer a range of private rooms suitable for couples and families with breakfast included in the nightly rate. Click here to see their latest prices

Light Palace Hotel — Another great modern hotel that is also well located within walking distance of the beach and the main Batumi attractions. Their private rooms are clean, comfortable and contain all the modern amenities. Breakfast is also included. Click here to see their latest prices

Not quite what you’re looking for? Click here to browse more Batumi hotels!

Travelling from Kutaisi to Batumi is a straight forward journey that is possible to do by a number of transport options!

Looking for travel insurance before visiting Georgia? World Nomads offers flexible and simple travel insurance policies with coverage for more than 150 activities that you can buy or extend while on the road.

Are you planning on travelling from Batumi to Kutaisi or back? Have you been recently? Let us know in the comments below! 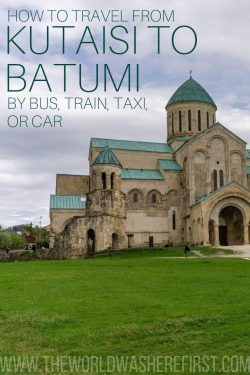 The Ultimate 3 Days in Tbilisi Itinerary

Tbilisi to Mtskheta Day Trip: How to Get There & Things to Do