Are you planning a trip to Lithuania’s coast and are interested in finding all of the best things to do in Klaipeda?

Klaipeda, Lithuania’s third-largest city, is often overlooked by tourists who may only drift in for a short visit before making a beeline for the sea and sand dunes of the Curonian Spit. Unlike many port cities, however, Klaipeda has none of the industrial facilities or dodgy vibes commonly associated with cities such as this.

On the contrary, the riverside promenade, laid-back vibe, and charming architecture and cobbled streets of the old town make this Lithuanian city a fantastic destination to visit in its own right.

There are numerous fun and interesting things to do in Klaipeda and it is a city that certainly deserves to be explored.

How to get to Klaipeda

Being one of the largest cities in Lithuania, getting to Klaipeda is fairly easy and it is well connected both domestically and internationally. There are multiple bus connections per day from all major cities in Lithuania and Riga. There is also a domestic train station that connects Klaipeda with Vilnius, Kretinga, and Šiauliai.

Being a port city, it is also possible to reach Klaipeda by ferry. There are daily ferry connections with Kiel and Sassnitz in Germany and Karlshamn, Sweden.

The closest airport is Palanga International, which is roughly 40 kilometres north of Klaipeda and has regularly scheduled flights to and from European cities like London, Copenhagen and Oslo.

If you arrive by car, Klaipeda is very well connected with Vilnius and Kaunas and there is ample affordable parking available throughout the city.

Things to Do in Klaipeda

Though quite small in size, there are a surprising amount of things to do in Klaipeda and we would recommend spending, at the very least, one full day exploring the city. Ideally, spending two or three nights in Klaipeda would give you enough time to really get a feel for the town while also allowing you to spend one day on the beautiful Curonian Spit.

The Old Town in Klaipeda is incredibly quaint and compact and, due to the fact that the streets are on a grid system, refreshingly easy to navigate. Take an hour or two to wander through the cobbled streets and admire the beautiful architecture while learning about the fascinating history of the city.

Throughout most of its history, Klaipeda was part of the Kingdom of Prussia, and the city was called Memel. Under Prussian rule, the city became a prosperous port due to its northern location, connections, and the fact that it is ice-free. You will find evidence of the German influence scattered about the Old Town.

It wasn’t until the end of the First World War that Klaipeda became a part of a newly independent Lithuania and adopted its current name. However, like the rest of the country, Klaipeda was also subject to both Nazi and Soviet occupation until secession from the union in 1990.

There is no denying that exploring the lovely Old Town is one of the top things to do in Klaipeda.

Located in the north part of the city, the Sculpture Park is one of the top destinations for Klaipeda sightseeing. The area where the park is located was once a cemetery but in 1977, it was turned into an art exhibition by the Soviet government. Residents were given the opportunity to rebury their loved ones in another cemetery in Klaipeda, though not all did.

The park contains 116 sculptures that were constructed between 1977 and 1991 and it is an interesting place to wander through while in Klaipeda.

Though the west side of the city is located on the Curonian Lagoon, which leads out to the Baltic Sea, Klaipeda is also situated at the mouth of the Danė River. Along the riverfront, there are numerous cafes, restaurants, and bars and it can be an incredibly picturesque place to walk along.

The river is also the permanent home of the massive sailing vessel, Meridianas, which now functions as a unique restaurant. Seeing the tall ship amongst the backdrop of the classical architecture of the Old Town will take you back to a Klaipeda of long ago.

If the weather is nice, it is also possible to hire a pedal boat on the river. This can be a great opportunity to see Klaipeda from a different perspective.

The Klaipeda University Botanical Garden offers a wonderful escape from the city. It is free to enter the grounds and stroll around the expansive botanical garden, which is home to a wide array of native fauna.

Most of the plants are labelled, so you are able to know what they are. There are also a number of benches throughout the garden, which makes it a fantastic area to have a picnic.

Though the botanical garden is located a bit outside of the city centre, it is easy to access by public transport and even easier if you have your own car.

Klaipeda has an interesting history as an important port city for the Kingdom of Prussia, the Russian Empire, the Soviet Union and Lithuania today.

Because of its long history, there are many museums to visit in order to learn more. Visiting museums is also a great idea if you’re wondering what to do in Klaipeda if the weather isn’t working in your favour.

Klaipeda has a long history of blacksmiths and this museum will help you learn all about this trade. Blacksmiths in Klaipeda had been well-known dating back to the 16th century and this unique museum gives an interesting insight into the craft.

There is also a collection of crosses and fencing exhibited here that were once part of the cemetery that has become the sculpture park.

If you’re interested in learning more about the history of this particular area of Lithuania, then the History Museum of Lithuania Minor is a great place to do that. The museum is fairly small and you can easily see the whole thing the 30 minutes to one hour.

Though originally established by Baltic tribes, Klaipeda didn’t officially become the city where it stands today until the knights of the Teutonic Order began to construct the city and a castle in the 13th century.

Though the castle does not stand today, the Castle Museum is located where it once stood and provides some interesting information about the history of Lithuania’s third largest city.

While there are certainly highlights in the city itself that make it a great place to visit, it is impossible to deny that a trip to the gorgeous Curonian Spit isn’t one of the best things to do in Klaipeda.

With the beautiful forest and imposing sand dunes making way to pristine, white-sand beaches and charming fishing villages, it is undeniable that the Curonian Spit is an unmissable destination in Lithuania.

How to get to the Curonian Spit

Because of its volatile ecosystem, there are no bridges to the Curonian Spit and the only way to get there is by ferry. There are two ferry terminals to choose from when trying to get there, the Old Ferry Port is only for foot and bicycle traffic and is located just outside of the Old Town.

Boats leave roughly every 30 minutes and costs €1.30 per person for a return ticket, regardless if you are travelling with a bicycle or not.

If you have a car and want to take the Klaipeda ferry to the Curonian Spit, you will need to head to the New Ferry Port a couple of kilometres south of the passenger ferry. Boats leave every 20 minutes and it costs €18.30 per vehicle for a return ticket, no matter the number of people in the car.

What to see on the Curonian Spit

The Curonian Spit is a narrow strip of land that is shared by both Russia and Lithuania. If you are visiting the spit from Klaipeda, it is likely you will only be visiting the Lithuania side.

It is a national park and nature reserve with some of the most impressive sand dunes in the Baltics along with beautiful beaches and charming fishing villages.

The main attractions in the Curonian Spit include the Paranids Dune, the hill of witches, Smiltyne beach and the towns of Nida and Juodkrante. There are also great cycling trails throughout the spit and it can be a great place to explore on two wheels.

Where to Eat in Klaipeda

While Klaipeda hasn’t seen the culinary revolution to the scope that Lithuanian cities like Vilnius and Kaunas has, there are still a number of great places to eat in Klaipeda. Here are some of our top picks:

One of the top restaurants in Klaipeda, Monai is a great option if you’re interested in experiencing the cool “modern Lithuanian” food trend that is sweeping the nation. Serving fresh, locally sourced, and inventive food, this restaurant has reimagined the local cuisine and it is definitely worth checking out.

Another cool and trendy restaurant in Klaipeda’s Old Town, MOMO Grill is a great option for either a great lunch or an inventive dinner. They have a simple menu of locally sourced ingredients and it is an incredibly popular place to eat in Klaipeda.

If you’re looking for a laid back and tasty meal in Klaipeda, then look no further than Restoranas Friedricho Pasazas. Located just a little bit outside the Old Town, this is a popular spot with both tourists and locals alike. They serve a lot of local seafood, some Lithuanian classics, and a few international favourites as well.

Where to Stay in Klaipeda

Because of its proximity to the popular Curonian Spit, there are a number of places to stay in Klaipeda. Here are some of our top choices:

Friedrich Guesthouse – Another small hotel, this Friedrich Guesthouse is good for couples and families alike. They have a number of rooms to choose from, are located very close to the Old Town and breakfast is included in the room rate. Click here to see their latest prices

Hostel Kubu – If you’re travelling on a budget or are keen to meet other travellers while visiting Klaipeda, the Hostel Kubu is the place for you. This small hostel has both dorm beds and private rooms on offer and is in a great location. Click here to see the latest prices on Hostelworld or Booking.com

Not quite what you’re looking for? Click here to browse other hotels in Klaipeda!

Though it is often only looked at as a jumping-off point to the Curonian Spit, Klaipeda is a lovely city that is worth visiting on its own. There are a number of interesting things to do in Klaipeda and it is a great city to explore when visiting Lithuania.

Are you planning on visiting Klaipeda? Have you been? Let us know if the comments! 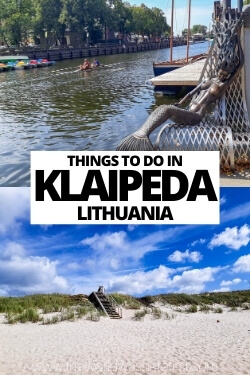 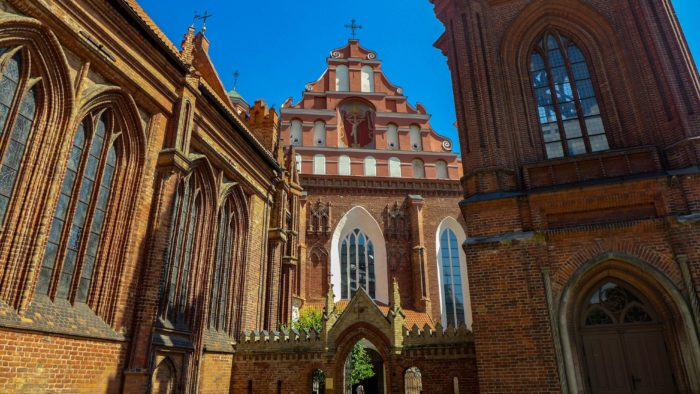 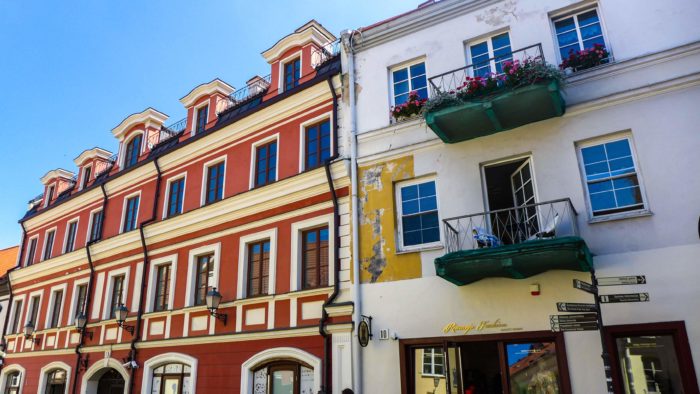