Travelling in the Balkans is a fantastic option for backpackers. Balkan hostels are extremely affordable for many travellers, with dorms in most countries starting at €10-15 per night. Furthermore, Balkan hostels are typically run by locals from that region who have a plethora of knowledge on their respective cities and strive to showcase the famous Balkan hospitality to their guests. After being on a Balkans backpacking trip for over three months, here are some of the Balkans’ best hostels that will undoubtedly enrich your travel experience and leave you wanting to come back to the Balkans!

Albania is one of the least developed countries in the Balkans but is quickly gaining popularity with backpackers visiting the beautiful Adriatic Coast and a number of interesting historical UNESCO towns.

Berat – the place to stay in Berat is the aptly named Berat Backpackers which is one of the oldest hostels in Albania. It has a fantastic garden terrace that provides brilliant views of the Old Town, making it a great place to laze away an afternoon.

Gjirokaster – Stone City Hostel was the first hostel to be opened in Gjirokaster when its doors opened in 2016. It’s run by Walter, a friendly Dutchman who has a wealth of knowledge on both the city and the surrounding area.

Tirana – the charms of the Albanian capital caught me off guard and I enjoyed my time in Tirana a lot more than I had initially expected. One of the main reasons for this was Trip’n Hostel, which was undoubtedly one of the best Balkan hostels I stayed in. Run by Erjon & Eni, this hostel has a fantastic chilled out vibe which — combined with their large outdoor garden, freshly cooked breakfasts and a rakija-filled bar — makes it difficult to leave!

Bosnia & Herzegovina is a fascinating country to visit. With a complex history, beautiful cities and natural beauty, there is plenty to keep any backpacker occupied here!

Mostar – Hostel Majdas, colloquially known as ‘one more night hostel,’ is a great place to stay when you visit Mostar. The owner, Majdas, is extremely hospitable and will welcome any opportunity to feed you! Make sure you go on one of the tours run by her brother, Bata, around Mostar and the surrounding areas! This is definitely one of the Balkans’ best hostels for backpackers.

Sarajevo – Hostel Franz Ferdinand is one of the best-rated hostels in Sarajevo, offering guests a hearty free breakfast, large common room and comfortable beds. There are also regular social events organised here making it a great place to meet other travellers.

Bulgaria is a severely underrated country that quickly became one of our favourites during our Balkans backpacking trip. The country is filled with interesting cities to visit, beautiful Black Sea coastal towns and a culture that has been influenced by many of its surrounding neighbours.

Plovdiv – Hostel Old Plovdiv is one of the Balkans’ best hostels in terms of the perks they offer when checking in. Firstly, there was an Australian Flag with a personalised sign waiting for us upon check-in. The friendly staff then offered us a complimentary bottle of local sparkling wine and placed lavender sachets on our pillows making this hostel more akin to a fancy boutique hotel than the stereotypical backpacker’s hostel. It is a fantastic place to rest your head when exploring Plovdiv!

Sofia – Hostel Mostel is a must for travellers visiting Sofia on a tight budget. They offer free breakfast and dinner (with a beer!) as well as affordable day trips to surrounding areas. It also has a huge common room, making it great for meeting other travellers.

Sozopol – If you want to visit Bulgaria’s Black Sea Coast and stay away from the large cities of Varna or Burgas, then Just a Hostel in Sozopol is a great option. It’s a friendly and chilled out hostel that has free breakfast and allows guest to enjoy a quieter side of the Black Sea.

Veliko Tarnovo – Hostel Mostel also has a branch in Veliko Tarnovo which also has free breakfast and dinner making it one of the best value Balkan hostels for penny-pinching backpackers.

Croatia is no secret when it comes to Balkans backpacking, with many travellers flocking towards its beautiful coastline. The hostel scene is thriving in Croatia with many affordable and social places to stay that some of the Balkans’ best hostels!

Dubrovnik – Villa Divine is a modern hostel that offers clean and comfortable amenities while also having a great social atmosphere. There are regular free nightly drinks where guests are offered wine or cocktails, which makes it perfect if want to enjoy the famous Croatian nightlife.

Split – One of the best places to stay in Split is Situs Hostel. It is a small homely hostel that is well located and organises a number of different events in and around Split. Definitely a great place to meet other travellers.

Zagreb – Hostel Mali Mrak is a cool artsy hostel based in a house in suburban Zagreb. It has an awesome common area and friendly local staff who are very accommodating and will suggest a number of great things to do in Zagreb! They will even take you out if you want to sample some of the city’s famous nightlife.

Zadar – As one of the top-rated small hostels in Zadar, the Lazy Monkey Hostel has everything backpackers could want from a hostel. It is located next to the Bus Station, offers dorm and private rooms and a bar on site that allows plenty of opportunities to socialise with other guests.

Technically, the majority of Greece isn’t considered a part of the Balkans. However, the lesser-visited north of the country has a lot of cultural similarities to other countries in the Balkans and is worth including on any Balkan backpacking trip!

Meteora – it’s difficult to visit Meteora on a budget due to tourism in the area being focused predominately on higher-budget travellers and tour groups. Meteroa Central Hostel in Kalambaka is an excellent budget option, offering both dorms and private rooms. There is also a nice garden area that makes for a good social setting.

Thessaloniki – As the main transport hub in Northern Greece, chances are you will have to pass through the second largest Greek city at some point, particularly if heading to Sofia from Thessaloniki. Little Big House is a great option for backpackers as it is located in a quieter area of the city and has a lovely terrace and cafe to relax in.

Kosovo is one of the newest countries in the world and following the horrific wars in the 1990s, tourism has started to pick up, particularly amongst backpackers keen to get off the beaten trail in the Balkans.

Pristina – Oda Hostel is a homely hostel in the heart of Pristina, with comfortable beds, clean facilities and plenty of storage area in the rooms. The staff are welcoming and there is even a pet cat!

Prizren – Ura Hostel is a family-run hostel in a traditional house that offers a few different dorm rooms with shared kitchen facilities and common room.

Over the last few years, Montenegro has gained increasing popularity amongst travellers as they search for cheaper destinations on the Adriatic Coast.

Kotor – Kotor is one of the best places to base yourself to explore Montenegro with Old Town Kotor Hostel offering a great budget option when you visit Kotor. It offers cheap breakfasts and dinners, a great common room and friendly staff who aren’t shy about showing you a good time.

North Macedonia is a country often overlooked on a typical Balkan backpacking route, however, with a number of great natural attractions and an interesting history, it’s well worth a visit!

Ohrid – Sunny Lake Hostel is another one of the best Balkan hostels, with the owner, Gyoko, having created a friendly and homely atmosphere where it feels more like you’re just staying at a friend’s house. He’ll also give you some great tips on what to do during your time visiting Ohrid!

Skopje – Lounge Hostel Skopje is a great hostel to stay when visiting Skopje, offering a very large common room to meet other travellers, clean rooms and a good location in a nice part of the city.

Serbia might be missing the coastline of some of its neighbours, but the incredible history, culture and warmth of locals make this country one of the best destinations in the Balkans.

Belgrade – Hedonist Hostel might just be our favourite Balkan hostel, having made a number of visits here throughout our travels. Not only does this hostel have amazing facilities with multiple common rooms and a fantastic outdoor seating area, but the staff also go above and beyond to make sure you have a memorable stay in Belgrade. Be prepared to spend a few extra rakija-fuelled nights than originally planned here!

Novi Sad – City Hostel is located in the centre of town, has large rooms and friendly staff who encourage socialising and will give you plenty of recommendations on how to explore Novi Sad.

If you are undertaking a long Balkans backpacking trip then you should check out Balkan Backpacker and Balkan Best Hostels which are two associations of independently owned hostels in the Balkans.

Both offer perks (including free laundry and rakija!) if you stay in multiple hostels that are a part of their groups. The majority of hostels mentioned in this article belong to one of these groups.

When travelling in the Balkans, it’s always a good idea to make sure you have a travel insurance policy so you’re covered for any unfortunate events! We like WorldNomads and always use them for our trips – click here to get a quote from WorldNomads

What do you think are the Balkans’ best hostels? Have you stayed at other great hostels that weren’t included in this list? Let us know in the comments below! 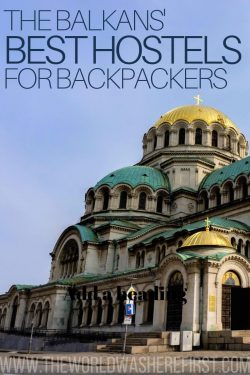 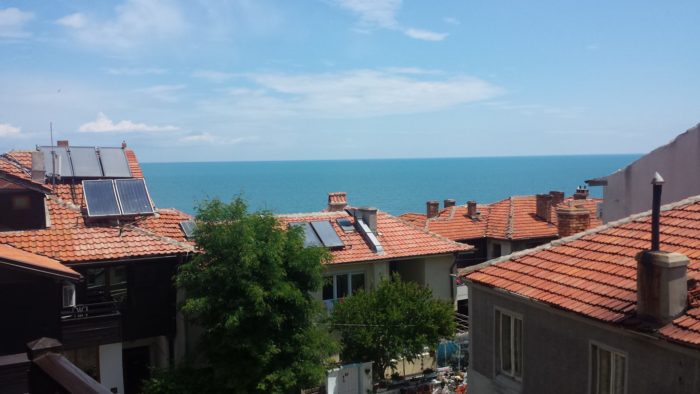 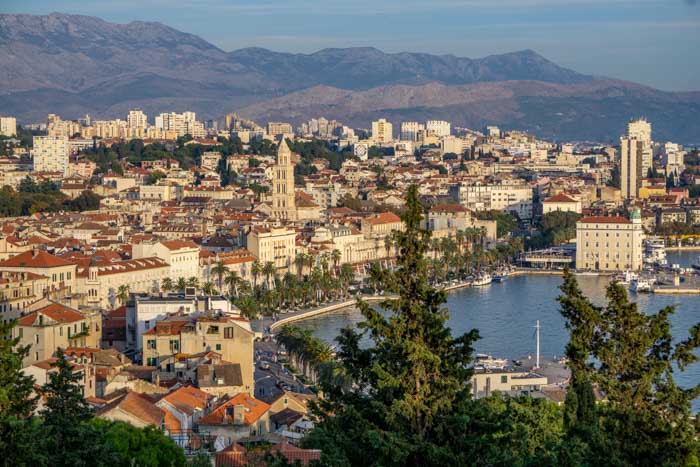 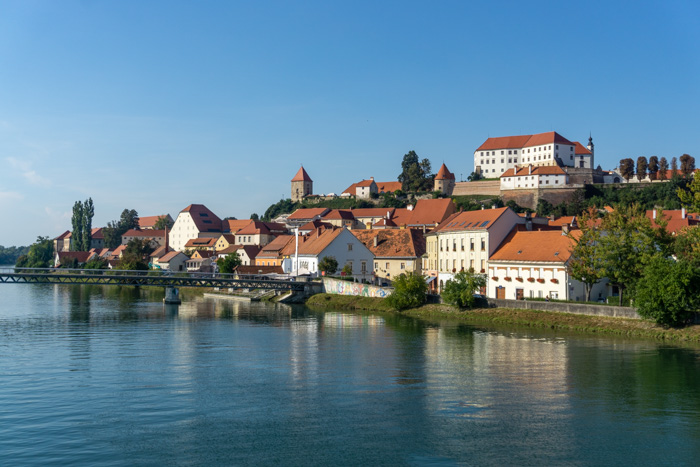