If you only have a few days to spend in the Georgian capital and want to venture outside of the city centre, then taking a day trip from Tbilisi to Mtskheta is one of the easiest options to organise.

As the capital of the old Georgian kingdom and the place where Georgians officially adopted Christianity, there are a few interesting things to do in Mtskheta. And, as it’s located only 20 kilometres from Tbilisi, it is an incredibly straight forward trip to take.

In fact, if you plan your time well, you can travel from Tbilisi to Mtskheta in the morning, see the main sights and be back in Tbilisi by lunchtime to give yourself another half day of exploring in the modern-day capital city!

Wondering about how to travel from Tbilisi to Mtskheta and the best things to do when you arrive? We’ll break down all the options to ensure you have a hassle-free day trip to Mtskheta!

How to get from Tbilisi to Mtskheta

There are three main options for travellers going between Tbilisi to Mtskheta on a day trip: marshrutka (minibus), taxi or organised tour.

Tbilisi to Mtskheta by Bus

The most affordable way to travel to Mtskheta from Tbilisi is to travel as the locals do and take a marshrutka.

Marshrutkas depart regularly from Didube Bus Station which is located right next to the Didube Metro Station and where frequent buses also leave to Kutaisi, Kazbegi, Borjomi & Batumi. If you haven’t taken the metro in Tbilisi previously, then you will need to buy a metro card at the station for 2GEL and add credit to the card. Each ride on the metro costs 0.5GEL.

Once you enter Didube Bus Station, you will initially be greeted by a number of taxi drivers who will try to convince you to go to Mtskheta with them. Most of them are not super aggressive and if you insist that you want to take the marshrutka they will tell you which direction to head in.

Walk through the first part of the bus station where the taxi drivers congregate and head towards a billboard that advertises buses to Kazbegi. Around there, look out for a marshrutka that has a sign in English to Mtskheta. Next, to the bus, you will see a window where you can buy tickets. It will have a blue sign that is labelled ‘Cash Desk’ and you can buy tickets to Mtskheta for 1GEL each.

The journey from Tbilisi to Mtskheta takes approximately 15 minutes.

The bus will stop in the centre of Mtskheta which is where you should get off. if you don’t have access to GPS, then pay attention to when you cross a bridge and turn right. You will drive next to the Mtkvari River for about 1 kilometre when the bus will stop to let you off into the centre of town.

Tbilisi to Mtskheta by Taxi

If you don’t want to take a marshrutka when travelling to Mtskheta from Tbilisi then you have a couple of options by taxi.

One option is to follow the instructions outlined above and head to Didube Bus Station. From there you can get a shared taxi to Mtskheta for around 5GEL per person.

Alternatively, you can organise a private taxi from the centre of Tbilisi for around 20GEL. To do so, I suggest downloading the Bolt app and organising your taxi through that application. This will ensure you get a fair price and not have to negotiate with a driver off the street. You can also ask your guesthouse or hotel in Tbilisi to call one for you.

Tbilisi to Mtskheta by Tour

While a Mtskheta day trip is straight forward to do independently, if you prefer to go on an organised tour then there are also a couple of options.

Similarly to if you choose to travel by taxi, you can first head to Didube Bus Station and try and organise a guided tour there. A number of taxi drivers will approach you offering to take you to Mtskheta including driving you to Jvari Monastery.

Another option is to organise a guided tour yourself. This might be a good option for you if you are short on time and want to see a couple of places in one day. For example, this tour takes you to Mtskheta and Gori and Uplistsikhe, which would be more logistically challenging to do in one day if travelling independently.

You can also organise private tours to Mtskheta here which operates throughout the day, includes transfers and includes explanations from the driver.

Except for the Jvari Monastery, all of the best things to do in Mtskheta are within walking distance of each other.

When you get off the marshrutka or first arrive in Mtskheta, as you walk down the main street which is filled with little tourist shops, it’s likely that your eyes will instantly be drawn to the Svetitskhoveli Cathedral.

Translating to mean Cathedral of the Life Pillar, it is the second largest church in Georgia and considered to be one of the most important Georgian Orthodox Churches. One of the people buried in the church is said to have been buried while holding Jesus Christ’s robe which is one of the reasons why this is a significant place of worship.

The Cathedral, like the rest of Mtskheta, can get very crowded so if you want to visit without the crowds, it’s advisable to get here early. Shorts, tank tops and short skirts are not permitted to be worn inside, however, there are wraps that you can use to cover yourself when entering.

There is also a Tourist Information Centre located next to the Cathedral if you want to pick up a map or get any additional information about Mtskheta.

While there isn’t a lot to do at the Mtkvari River, there are a couple of cafes that overlook the river which makes for a great spot to enjoy a coffee or tea in the morning. There’s also a nice view of the surrounding hills and mountains down by the river.

Located about 600 metres from the Svetitskhoveli Cathedral, the smaller Samtavro Monastery receives a fraction of the crowds and is definitely worth a visit. While the main church here was built in the 11th century, it is believed that this is the site where Saint Nino lived which is why it is considered a significant place to visit for Georgian Orthodox Christians.

As the fortress is a bit further away from the main sites in Mtskheta, it doesn’t get many tourists and unfortunately when we visited, they were repaving the path to the top which meant we couldn’t explore all of the fortress.

Nevertheless, we were able to get to the bottom section and enjoy some nice views of the surrounding area. If you’re in a rush on your Mtskheta day trip then you can probably skip the fortress, particularly if going to Jvari Monastery which arguably has more impressive views.

Saving possibly the most impressive for last, one of the best things to do in Mtskheta is to visit the Jvari Monastery.

While the Monastery might look close when you are in the centre of Mtskheta, the way the roads go up there means it’s actually about a 16 kilometre/20 minute drive to get there. This means you usually can’t walk more than a few minutes without a taxi driver approaching you and asking if you want to visit Jvari!

As we were walking back from the Bebris Tsikhe Fortress, a taxi driver stopped next to us and agreed to take us to Jvari and back, including waiting while we explore for 15GEL. I have heard that is is possible to hike up to Jvari from Mtskheta, however, from what I could see, it will involve at least some walking along the highway.

Built originally in the 6th century, the Jvari Monastery itself is quite small and if you’ve been to other monasteries in Georgia you might not be super impressed. However, what undoubtedly makes visiting Jvari worthwhile is the absolutely amazing views that you can get of Mtskheta and the surrounding area.

Expect to spend about 20-30 minutes here, enjoying the view and exploring the monastery.

Going back from Mtskheta to Tbilisi

If you are travelling to Mtskheta independently and want to go back to Tbilisi, then I highly recommend visiting Jvari Monastery last. This is because the route you take from Mtskheta to Jvari intersects with where the marshrutkas to Tbilisi go back to.

We asked our taxi driver to drop off at the marshrutka stop and were able to hail down a marshrutka within a few minutes. He told us that there is usually at least one marshrutka every 10-15 minutes.

Some of the marshrutkas that go past will be the ones that drive the Mtskheta to Tbilisi route only, while others might just be passing on the same route. Either way, just hail any that you see coming towards you and ask them if they’re going to Tbilisi – most should be at least stopping at Didube Bus Station. Pay 1GEL to the driver when you get off in Tbilisi.

A Tbilisi to Mtskheta day trip is one of the easiest day trips to do independently from the capital and gives you an opportunity to see another part of Georgia while staying in Tbilisi.

Are you planning on going from Tbilisi to Mtskheta? Have you been recently? Let us know in the comments below! 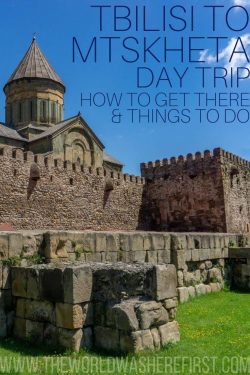 62 Best Things To Do In Tbilisi, Georgia

The Ultimate 3 Days in Tbilisi Itinerary

The Ultimate Georgia Itinerary: 1, 2 or 3 weeks